Defector sails home across the NLL

Defector sails home across the NLL 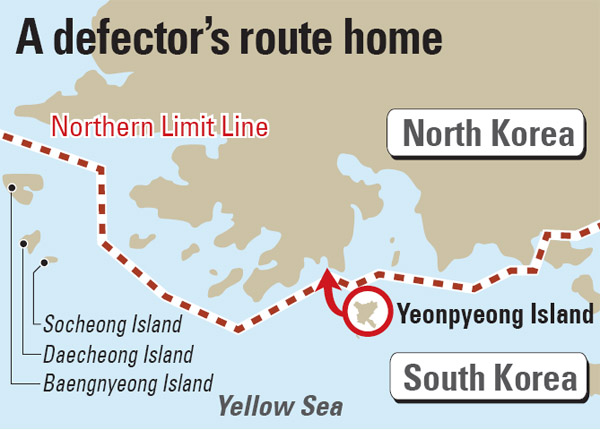 A North Korean defector boomeranged back to his homeland by crossing the inter-Korean maritime border, evading a South Korean military that is on high alert after daily threats from Pyongyang.

According to the South’s Joint Chiefs of Staff, Lee stole a 9.7-ton fishing boat from Yeonpyeong Island, a frontline island only 0.8 nautical miles (1.5 kilometers) south of North Korean territory, at around 10:30 p.m. on Wednesday and sailed away.

The owner of the stolen boat said he left the key in its ignition.

South Korean marines detected the boat on two radar devices on Yeonpyeong Island at 10:46 p.m. when it was about 0.6 nautical miles south of the NLL, the military said. The boat crossed the border at 10:49 p.m.

At 10:51 p.m., the marines ordered a high-speed boat to chase the defector. At 10:54 p.m., the speed boat departed from Yeonpyeong. It failed to find the defector’s boat.

The military said it has only two radar units on Yeonpyeong, but they monitor the northern regions of the island, not the southern region, which was where the boat was stolen. They couldn’t detect Lee until he had almost reached the border.

The military and police launched a joint investigation into whether Lee was a double agent all along sent to the South to spy.

According to the Unification Ministry, Lee defected to the South on March 21, 2007 via China. He worked as a fisherman in Pohang, a coastal city in North Gyeongsang, until he came to Yeonpyeong Island on Feb. 27 to look for a job as a fisherman.

The ministry said Lee told one of his friends in Pohang on Feb. 24 that he would “attend a wedding ceremony” and went to Seoul.

At the time, tensions were rising in the aftermath of North Korea’s third nuclear test. But the Unification Ministry said it is not illegal for a North Korean defector to travel anywhere in the country, including a frontline island.

“After they finished their mandatory education in the Hanawon resettlement center, there is no legal problem for them to go anywhere,” a Unification Ministry official said. “Still, they should report their travel to the government and Lee apparently violated this rule.

A Defense Ministry official said, “Lee and other fishermen on Yeongpyeong had conflicts. They scolded Lee for being bad at his job and said it was because he was from North Korea.”

The owner of the hijacked boat told the military that he made a phone call to Lee’s mobile phone that same night and told him to come back, but Lee was already in the North. During the phone conversation, Lee allegedly said, “I’m back in the general’s arms,” referring to North Korean leader Kim Jong-un.

He also told the boat owner, “You son of a b****, you should have been nicer to me when I was there.”