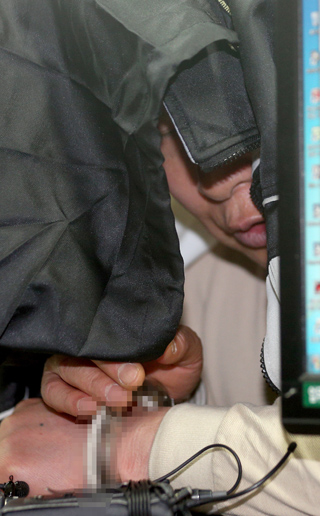 Cho Se-hyoung, a famous thief once nicknamed the Korean Robin Hood for his brazen break-ins into wealthy families’ homes in the 1970s and ’80s, was caught again Wednesday night for a theft attempt at an upscale villa in Seocho District, southern Seoul.

The Seoul Seocho Police Precinct reported yesterday it arrested the 75-year-old thief, who has been convicted of robbery 10 times and served 18 years in prison in total, for breaking into a first floor villa at around 8:30 p.m. Wednesday and attempting to steal jewelry worth up to 50 million won ($44,450).

The police reported a masked Cho broke into an empty house by breaking the window adjacent to the flower garden with a crowbar and stole 33 pieces of jewelry, including rings and necklaces.

A neighbor who heard the sound of breaking glass and saw the broken window called the police, which dispatched officers who caught the thief at the crime scene.

It is reported the veteran robber at first tried to fight back against the police officers with a fountain pen, but soon gave up the fight as he saw the officers had their guns drawn.

“The suspect acknowledged the charge brought against him. We are now investigating to find out if he committed any other thefts [prior to the arrest yesterday],” said an anonymous police officer involved in the case.

Cho reportedly testified he carried out the theft to make a 30 million won rent payment for an office for a church doing missionary work.

In the 1970s and ’80s, people referred to Cho as Robin Hood, as he only targeted the wealthy and those in power in high-profile burglaries. He even donated some of his spoils to the poor. He also had a self-imposed rule to not use weapons during the act.

Cho once famously said he thought “it would only be fair to hand out stolen fortunes” from the wealthy “to the have-nots.”

After a series of highly publicized robberies, the brazen thief was caught in 1982 and spent 15 years in prison.

During his prison term, Cho made headlines again as it was reported he converted to Christianity and declared he would spend the rest of his life as a preacher.

Following his release in 1998, the self-proclaimed Christian gave speeches and anti-crime lectures to youth and at universities, but his new righteous act did not last long as he was again arrested by the Japanese police in Tokyo for a theft in 2000.

Cho was sent back to Seoul and spent three and a half years behind bars.

Cho was once again in trouble as he was indicted for threatening an owner of a jewelry shop in 2009 and extorting 300,000 won. He was acquitted of the charge by a court in 2011.