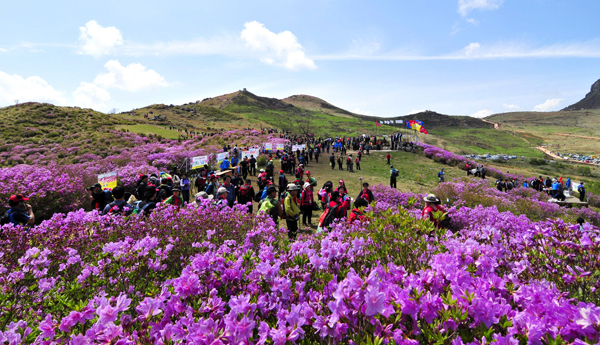 The Hwangmaesan Royal Azalea Festival will kick off next month on one of Korea’s tallest mountains. [JoongAng Ilbo]

Last year, flowers were late to blossom, much to the disappointment of organizers at the nation’s celebrated spring festivals, and this year’s spring seems to be trailing behind schedule, too.

Despite brief periods of warmth, the weather is not as warm as hoped for and it’s too cold at night to go out without a jacket. It’s hard to tell the season when there are no flowers to go by. The colorful assortments of plants usually serve as a telltale sign of spring’s arrival.

Fortunately, though, those in colder parts of the country can venture to warmer regions that host the spring-themed celebrations where flowers are already in bloom and will continue to blossom until May. 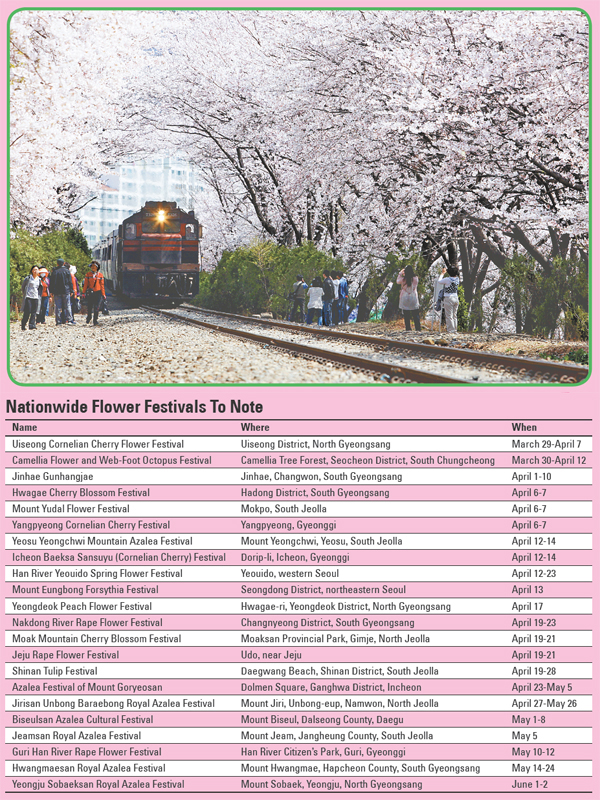 The flower-lined railway is one of the most popular destinations for visitors to Jinhae Gunhangjae.

Organizers of this nationally recognized festival never seem to catch a break. This year, they were worried that the flowers would bloom ahead of opening day on April 1, and last year, it was the reverse. It was pure panic as the flowers took their time in opening their buds.

Yet somehow they always seem to make it work and the festival is always high on the list of destinations preferred by flower lovers. The best spots to take it all in are Gyeonghwa Station, also dubbed Cherry Blossom Road, and Yeojwa Stream.

Flowers frame the tracks leading to Gyeonghwa Station and even the slightest breeze moves the plants and rains flowers for all to see. The picturesque scene is perhaps one of the nation’s most recognizable images and is plastered on countless brochures and postcards, not to mention etched into minds of tourists.

On the other hand, Yeojwa Stream is best for nighttime tours.

From Jinhae Park Land to Jinhae Girls’ High School, there is also a 1.5-kilometer (0.93-mile) path completely surrounded by cherry blossoms. The lighting fixtures make it a spectacle, and lovers flock to Romance Bridge after sunset. 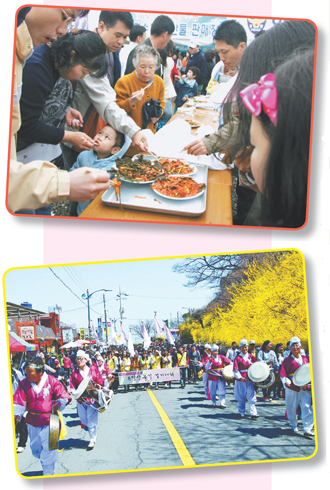 Above: At the Camelia Flower and Web-Foot Octopus Festival, visitors are able to feast their eyes and mouths. Below: The Mount Yudal Flower Festival turns Mokpo into a yellow wonderland.

In April, Mount Yudal reinvents itself into an artists’ pallet: forsythias, camellias, and cherry and apricot blossoms color the mountainside yellow, white, pink and red.

Perhaps because there are so many flowers on display, organizers decided not to pick just one to represent the area’s festival. But most flower enthusiasts will still associate the great golden forsythia with the area.

With a peak at just 228 meters (748.03 feet) altitude, this rather small mountain sports a seven-kilometer yellow belt in the springtime thanks to the ring road that runs through it. Nevertheless, the most beautiful passage is the two-kilometer route from Nojungbong, one of the peaks, to the sculpture park. The yellow fields visible against the blue ocean backdrop are quite a memorable view. Although the city of Mokpo originally scheduled events for April 13-14, weather conditions pushed the start to this weekend.

Along with Mount Hawang and Mount Muhack in South Gyeongsang, Mount Yeongchwi in Yeosu, South Jeolla, is famous for azaleas.

Located at 510 meters altitude, the mountain is covered in tens of thousands of azalea plants at this time of year. The flowers begin to open in early April, and in just two weeks, the top half of Hawang is covered in pink. The viewing trail begins at GS Caltex gas station in Wollae-dong and makes its winding way to the peak. In between the delicate flowers, clusters of flame grass add splotches of silver to the pink, making a beautiful scene for hikers on their way up. This year’s festival runs from April 12 to 14. 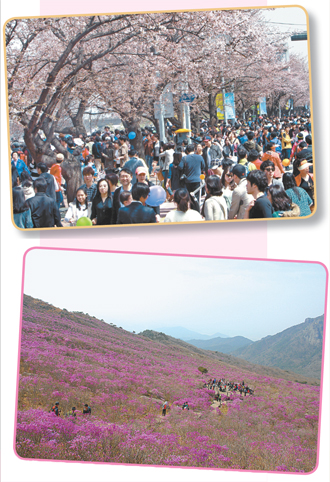 Above: The annual Han River Yeouido Spring Flower Festival draws many visitors from in and around Seoul. Below: The Biseulsan Azalea Cultural Festival on Mount Biseul is a popular hiking spot in the springtime.

Located between Habcheon and Sancheong counties in South Gyeongsang, Mount Hwangmae peaks at 1108 meters, putting it among the nation’s tallest. As such, it is popular with campers, and cars are allowed seven-tenths of the way up. From that point to the 900-meter mark, royal azaleas cover the terrain almost completely. No other plants are even visible across an area of 10,000 square meters (2.5 acres). From afar, it can look as if the whole mountain is torched pink.

Trees on the trail are usually taller than an average-sized adult, and there are even mazes formed between them. To protect the flora, there is also a wooden trail that can be used to navigate around the flowers.

From the watchtower, built to spot bush fires, the view from 940 meters is particularly breathtaking. It is like looking down from heaven with clouds strewn here and there above a pink ocean.

The festival at this special mountain will kick off on May 14 and run until the 24th.