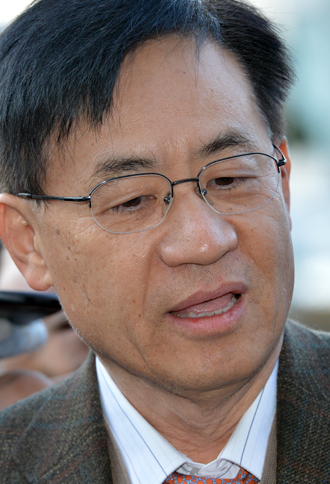 The nomination of Professor Hong Ky-tack from Chung-Ang University as chairman of the Korea Development Bank Financial Group and its banking unit KDB is sparking a strong backlash from the institution’s labor union, which released a statement yesterday criticizing the nominee’s lack of experience in business and government.

“With the new administration kicking off, the plan to privatize KDB Financial has been practically put on hold and the policy financial institution [KDB] is expected to undergo a reshuffle,” the labor union said in a statement yesterday. “It is a crucial moment for us right now that will decide the organization’s fate.”

The KDB Financial labor union held a rally inside the institution’s headquarters in Yeouido, western Seoul, to protest the nomination.

The nomination came amid pressure on Kang, a close associate of former President Lee Myung-bak, to step down. Hong is the first professor to be nominated as chairman of KDB Financial Group. Previous chairmen had been former government officials, like Kang, who was former finance minister during the Lee administration.

“Even in the former administration, a close aide [of the president] was sent [to head KDB] as part of a parachute appointment,” the labor union said. “It is deplorable that another close aide has been sent to KDB, the country’s leading bank.”

Park and her transition team have repeatedly expressed the need to avoid so-called “parachute appointments” and select public officials based on expertise. Hong is a graduate of Sogang University, where Park also studied, and was one of the initiating members who established her Institute for the Future of State.

Some others, however, share the view that it makes sense to appoint someone whom the president knows well.

“Hong was part of the presidential transition team,” said a financial expert who asked to be not named. “He should know well the direction of state affairs.”