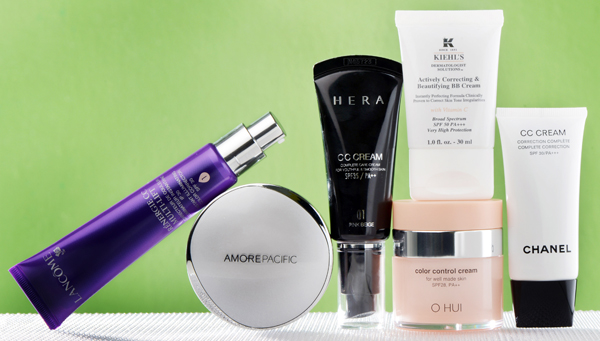 CC creams from a variety of cosmetics brands. [JoongAng Ilbo]

CC cream, also known as color control cream for skin and the follow-up product to BB cream, is taking the cosmetics industry by storm and rapidly gaining popularity. Stylish women keen to keep up with changing trends and fashion say they have already replaced BB creams with the new CC cream products.

CC cream is an improved and refined version of BB cream, which was created and developed in Korea. BB cream has been hugely popular here and throughout Asia and is making inroads in Europe and the United States.

The local cosmetics industry is rushing to introduce CC cream products, while focusing on whether they will replace BB cream products that have been dominating the cosmetics market since 2006.

Kim Min-hee, a 31-year-old who works for a fashion company, recently bought a CC cream. Kim, who has been putting on makeup with BB cream only during her busy morning hours, heard about CC cream from a friend.

“As I go to work without the time to even put on skin lotion every morning, I have only been using BB cream. When I put on BB cream, my face felt a little tight. But with CC cream, my face is more moisturized while most of the blemishes are concealed as much as when I used BB cream,” said Kim.

BB cream was developed for use after surgical procedures by dermatologists. About 2006, it went viral among Korean celebrities. Dubbed a magical cosmetic that creates a spotless face without makeup, it spread to the general public in 2007.

BB cream did not exist in the international cosmetics market, until famous foreign brands introduced BB cream products because of their popularity in the domestic market.

As with BB cream, it did not have an official name, so CC refers to “color change” or “color corrector.”

The growth of CC cream slowed briefly before becoming even more popular.

At the end of January, Banila introduced its It Radiant CC Cream and had to ramp up production after it sold out in five days.

“Sales increased even more and now an average of 17.5 products per store are sold every day,” said Shin Joo-hee, marketing director at Banila.

“We are short of supplies, as sales are much higher than we expected. We are urgently flowing in the products from other parts of Asia,” said Kim Hyun-kyung, PR manager for Chanel.

In addition, other low-price cosmetics brands such as The Face Shop, Tony Moly, Espoir, Nature Republic and OHUI all have launched CC cream products. Foreign brands such as Lancome and Kiehl also released products.