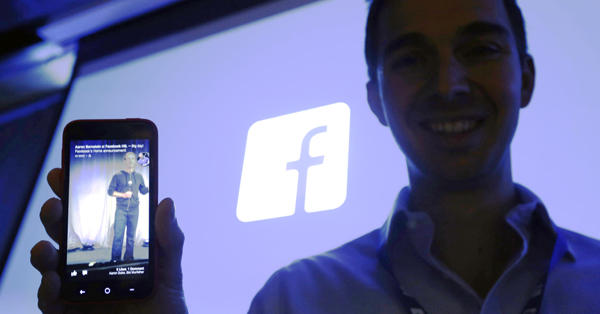 Facebook, with newly released software that embeds social-networking features more deeply into smartphones, is ratcheting up efforts to keep users engaged and lure marketers to advertise on small screens.

The software, which the company calls Home, makes it easier to access Facebook features - such as friends’ photos, messages and status updates - on a mobile device’s home screen, CEO Mark Zuckerberg said at an event Thursday in Menlo Park, California. The application is available starting next Friday on Samsung Electronics and HTC phones that run Google Inc.’s Android operating system.

Now that the majority of users access Facebook via mobile devices, Zuckerberg needs ways to keep them engaged longer while coaxing advertisers to pay to place promotions. While the new software may appeal to some dedicated users, it may do little to help Facebook get a broad set of consumers to change the way they interact with smartphones, according to Charles Golvin, an analyst at Forrester Research.

At the event, HTC executives announced the HTC First, a device that will prominently feature Facebook’s Home application and become available next week. Ralph De La Vega, head of AT&T’s mobile business, said HTC First will run on his company’s most advanced wireless network and sell for $99.99.

Home will have monthly updates, can be installed from Google Play, Google’s online app store, and will be available on tablets in coming months, Facebook said.

While the program will not initially have advertising, Zuckerberg said promotions will be included in future updates. “There are no ads on this yet,” he said. “I’m sure at some point there will be.”

A messaging feature called Chat Heads will let users interact with friends while any app is on their screen. It combines SMS text messages with Facebook’s own messaging service.

Amazon.com uses a version of Android in the Kindle Fire tablet. In Amazon’s case, that means bypassing Google’s preloaded applications, such as Gmail, Google Maps and YouTube, which generate revenue for Google.

While the iPhone operating system is controlled exclusively by Apple, Google provides more flexibility with Android. Companies can take older versions of the software and customize them for their own services and preferences.

“This latest collaboration demonstrates the openness and flexibility that has made Android so popular,” said Christopher Katsaros, a spokesman for Mountain View, California-based Google. “It’s a win for users who want a customized Facebook experience from Google Play - the heart of the Android ecosystem.”

Some apps already available in the Google Play store, such as GO Launcher EX and Apex Launcher, let users customize content that appears on their phones when the screen is locked.