Sculptures made of welded steel wires, including “Body in Question” (2009), left, and “Lost in a Finite Space” (2011), right, are part of veteran artist John Pai’s solo show at Gallery Hyundai. Provided by the gallery

Sculptures are commonly associated with a solid mass and sense of weight. But a group of sculptures, now on display at Gallery Hyundai in the art zone east of Gyeongbok Palace, look like they’re made of numerous spaces filled with air and lines with little sense of weight.

The sculptures, made by veteran Korean-American artist John Pai, are made of black and copper-colored steel wires and many of them have rhythmical abstract forms.

Eleanor Heartney, an art critic, wrote in an introduction for the exhibition that his works “might be described as embodied music.” 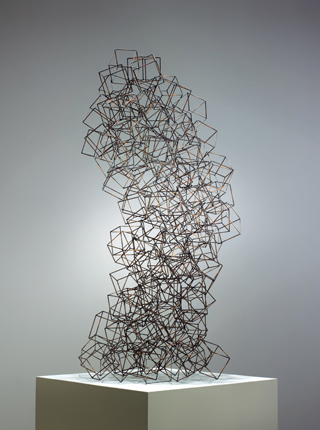 The solo show of the 75-year-old sculptor, titled “In Memory’s Lair,” features 20 ?of his latest works.

“Sculpture may inhabit space but it can only be experienced in time,” Heartney wrote. “To really apprehend a sculpture, one must move around it, studying how parts relate to each other.”

Accordingly, sculptures can have similarities with music, she pointed out, as music also involves a relationship of part to part that unfolds in time.

In particular, each of Pai’s sculptures “is built outward from a single unit into ever more complex organic structures that suggest visual approximations of the formal elements of western music,” she said.
"Actually, I listen to music, mainly jazz, when I make works,” Pai told the reporters at the gallery late last month. “Jazz is similar to ?abstract paintings.”

He said he ?grew up among music-loving family members and learned dancing due to curiosity when he was young. So it is not surprising that his sculptures look to be flowing like music and dance.

“I prefer steel wire, because it is solid but can flow like water,” he said. “So, I can make sculptures with it, just like doing drawing.”