As Beijing and Tokyo trade jabs, Korea rises above the fray

As Beijing and Tokyo trade jabs, Korea rises above the fray 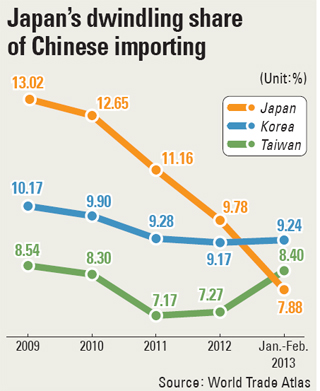 For the first two months of the year, China’s No. 1 source of imports was Korea, with electronics equipment making up about half the total, the Korea Trade-Investment Promotion Agency (Kotra) said yesterday.

According to Kotra, 9.24 percent of China’s imports came from Korea, 8.4 percent from Taiwan and 7.88 percent from Japan in January and February.

During the same period, Korea’s overall exports to China increased 6.9 percent year-on-year, while Japan’s shrank by 39.9 percent. Japan had already seen an 8.6 percent decrease in its exports to China last year.

Electronics products represent 42 percent of the Chinese import market, and Kotra expects the trend to continue.

Exports of integrated circuits, Korea’s flagship export item to China, grew by 25.1 percent year-on-year during January and February, while exports of mobile phones went up 39.6 percent and auto parts 31.8 percent.

Meanwhile, Chinese imports of Japanese-made integrated circuits fell 20.3 percent, auto parts were down 34.6 percent and cars were off 39.5 percent.

However, although Korea topped the Chinese import market, the country’s market share has remained fairly constant for the past 10 years. This indicates Korea’s No. 1 rank was primarily due to the precipitous drop in Japan’s share of China’s import market.

Kotra suggested that Japan’s sluggish exports to China even with the weak yen were due to anti-Japanese sentiment surrounding territorial disputes and other issues.

However, Kotra also suggested that as the exchange rate effect usually kicks into gear after six months to a year, Japan’s exports could rebound.

“We expect Japan’s exports of electronics equipment and automotive parts to recover as Japanese products will secure price competitiveness in the Chinese market with the weak yen,” said a Japan External Trade Organization, or Jetro, official.

Kotra said that in order for Korea to expand exports to China, it should increase general trade, the shipment of completed products, rather than processing trade, which involves parts and has been decreasing recently.