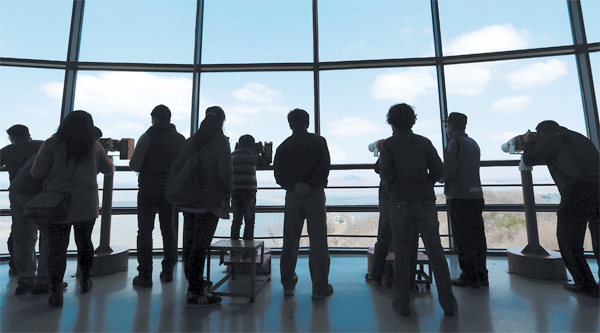 Visitors look into North Korean territory through binoculars at an observatory near the border village of Panmunjom, in Paju, Gyeonggi, yesterday. [AP/NEWSIS]

North Korea appears to be making preparations for a fourth underground nuclear weapons test at a site in Punggye-ri, the same site where it conducted its third test, a South Korean government source told the JoongAng Ilbo.

“We have detected increased activity of labor forces and vehicles at the southern tunnel of the test site in Punggye-ri, where the regime has worked on maintenance for facilities since its third nuclear test in February,” a high-ranking South Korean government official said. “The activities appear to be similar to those before the third test, so we are closely monitoring the site.

“We were also tipped off that Pyongyang would soon carry out an additional nuclear test,” the official said. “But we are analyzing if it is indeed preparation for an additional test or it is just to pressure Seoul and Washington.”

The official added this activity has been monitored since last week.

A high-ranking Defense Ministry official also said the North could test an additional nuclear device at any time.

“Since October 2012, North Korea has prepared for a nuclear test that could happen in both the western and the southern tunnels at the same time,” the official said. “If there is a political decision, they can test a nuclear device within several days.”

In February, when the North carried out its third test, South Korean government sources told reporters that the test was seemingly conducted in the western tunnel. If it is indeed true, the southern tunnel would be available for an additional test.

A military official also told the JoongAng Ilbo that Pyongyang appears to be preparing to launch a medium-range missile with a range of at least 3,000 kilometers (1,864 miles).

“They moved a medium-range missile by using a mobile launch pad to nearby Wonsan City off the East Sea and hid it,” the official said. “As they can use the mobile launcher, we assume they can launch it anytime they want.”

Amidst rising military tensions with Pyongyang, U.S. Defense Secretary Chuck Hagel reportedly decided to delay a long-planned launch of an intercontinental ballistic missile, or ICBM, out of concerns that it could provoke the regime.

Hagel made the decision on Friday to put off the “Minuteman 3” test, which was scheduled next week at Vandenberg Air Force Base in California, because of concerns that it could worsen military tensions with North Korea, a senior Pentagon official told The Associated Press on Saturday on the condition of anonymity.

The official said Washington would continue to “support the building and testing of nuclear deterrent capabilities” of North Korea, the AP said, but there is no technical problem with the rocket launch.

Seoul and Washington also decided to postpone a top military meeting planned next week for the same reason.

South Korean Joint Chiefs of Staff chairman, Gen. Jung Seung-jo, and his U.S. counterpart, Gen. Martin Dempsey, were planned to meet in Washington on April 16 and talk about the joint military cooperation and sign a bilateral agreement over future cooperation after operational control is transferred to South Korea.

Seoul has asked Washington for the delay, in the midst of rising military tensions due to Pyongyang’s entry ban on a joint inter-Korean industrial park and its increased activities to prepare a long-range missile launch, sources told Yonhap News Agency.

Previously, Pyongyang has notified foreign embassies to vacate all staff by Wednesday, and they don’t ensure their safety after that date.

“Pinpointing a certain date, April 10 [Wednesday], seems to be part of their strategy,” Kim said, quoted by Kim Haing, spokeswoman for President Park Geun-hye, at a daily briefing yesterday.

“We are open to every possibility and thoroughly prepared,” Kim said, according to the spokeswoman. “Whether it is merely rhetoric or not, we maintain military vigilance.”

The chief of National Security, Kim, also said he assumes the series of provocative messages from North Korea are psychological warfare to sway public opinion in the South.

“North Korea is issuing headline-grabbing messages every day,” Kim said. “We judge this is to sway public opinion of our people and escalate anxiety about national security, in order to switch the current administration’s policies regarding North Korean affairs [in favor of the regime].”