For some, Sejong is just too far away

For some, Sejong is just too far away

Government officials on Tuesday get on commuter buses in Sejong City to return to their homes in Seoul after their work in the new mini-capital city. By Kim Seong-tae

SEJONG - Every morning, Hyun Oh-seok, minister of strategy and finance and deputy prime minister for the economy, heads to a VIP room of the Korea Deposit Insurance Corporation on the 15th floor of the company’s headquarters in central Seoul. His secretaries and aides use a conference room next door.

Hyun likes the setup because it’s only 2 kilometers (1.24 miles) from the Blue House. His actual office is in Sejong City - 120 kilometers away. The minister is negotiating with the Korea Deposit Insurance Corporation to get a lease on the rooms through the end of this year.

Hyun is not the only bigwig scrambling to find office space far from their actual offices in Sejong City. Choo Kyung-ho, first vice minister of finance and strategy, opened an office in the Korea Federation of Banks building in Myeong-dong, while Lee Suk-joon, second vice minister, found an office in the government complex building in Gwanghwamun.

March 29 marked the 100th day of the launch of the spanking new complex in Sejong City, a mini-capital set up to decant government offices from overcrowded Seoul. But predictions by skeptics that some government functions have to be near the center of power - the Blue House and National Assembly - are coming true. 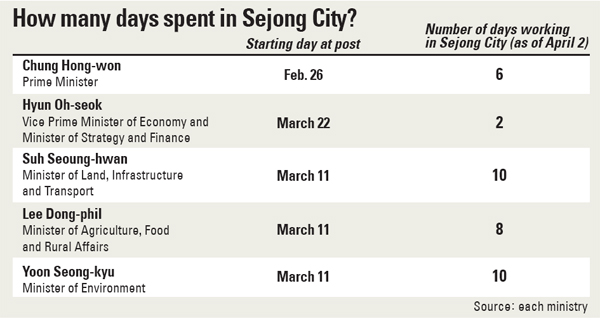 Since his inauguration on March 22, Hyun Oh-seok made only two visits to the government complex in Sejong. As of April 3, Prime Minister Chung Hong-won worked from his Sejong City office for only six days.

They stay in Seoul not only to brief the president. In addition, cabinet meetings, vice ministerial meetings and other inter-governmental meetings take place in Seoul.

And because the ministers and vice ministers are in Seoul, senior officials of the ministries that moved to Sejong City frequently travel up to Seoul.

“Officials higher than bureau chief-level work in Seoul three out of five days,” said a Finance Ministry official. “It’s not easy to work in Sejong.”

The government said it will utilize video conference calls to minimize the need for bureaucrats to travel between Seoul and Sejong City, but a video call system that cost 5.5 billion won ($4.9 million) to create is rarely used.

Instead, the money spent on civil servants’ business trips between the two cities is skyrocketing. The Ministry of Strategy and Finance alone is spending 300 million won a month for the trips. The ministry said by the end of this year, it will spend about 130 billion won for trips between Seoul and Sejong.

The government also said the cost of operating commuter buses between the two cities is also higher than expected. They are used by people whose jobs have been relocated to Sejong but who have continued to live in Seoul.

According to the Ministry of Security and Public Administration, about 100 buses operate between the government complex in Sejong and the capital region. The government planned to spend 7.45 billion won this year to charter the buses, but the budget is expected to run out soon.

“Video conference calls were supposed to replace traveling, but when we actually do it, it’s very hard to communicate,” said a civil servant. “After a meeting, you continue to exchange ideas while eating a meal together, but that’s impossible with conference calls.”

Ministers and vice ministers are also staying close to Seoul because the Blue House is keeping a tight grip on the public limelight. For example, on April 1, the Ministry of Land, Infrastructure and Transport grandly announced a series of measures to revitalize the moribund property market from Sejong City. But the media ignored that announcement to concentrate on a briefing on the measures by Cho Won-dong, senior presidential secretary for economic affairs, at the Blue House.

Similarly, when the Ministry of Strategy and Finance announced the 2013 economic policy roadmap on March 28, the announcement was made in Sejong. But Cho gave a press briefing in Seoul that the press paid more attention to.

“We are working hard, but why does a presidential aide steal the attention?” a public servant in Sejong complained.