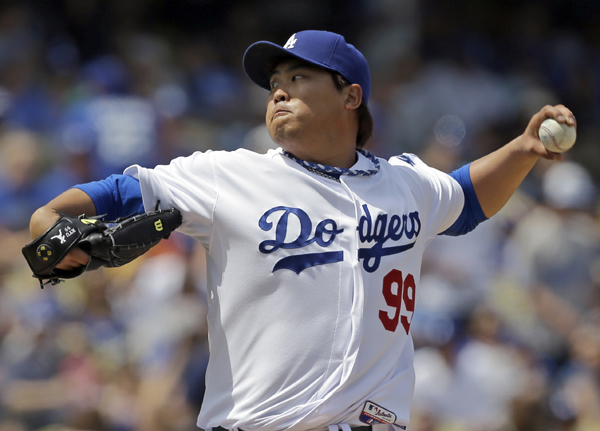 He allowed a two-run homer in the first inning, but kept additional threats at bay until he left the mound in the seventh inning. The 26-year-old left-handed pitcher gave up three hits, including the homer, and two walks over 6 1/3 innings in the Dodgers’ 6-2 victory over the Pirates.

He is the first Korean pitcher to win in the Major Leagues since Park Chan-ho, who broke the record for wins from an Asian pitcher with his 124th MLB victory in the Pirates’ victory over the Florida Marlins on Oct. 1, 2010.

“I said that I would make my fans happy Monday morning Korean time, and I am happy that I could keep that promise,” Ryu told reporters after the game.

Ryu, who allowed 10 hits in his debut game against the reigning-champion San Francisco Giants last Tuesday, was nervous in the beginning, allowing a hit to leadoff Starling Marte. He retired Neil Walker but Andrew McCutchen hit an 89 mile-per-hour pitch from Ryu to send it over the left-handed wall, the first homer the Korean allowed in the Major Leagues.

After he managed to put out the first inning fire, Ryu regained his composure and retired 16 of 18 players over the next 5 1/3 innings. He struck out six. His teammates also helped his victory, with Adrian Gonzalez tying the game with a two-RBI hit in the bottom of the first. The three relievers for Ryu did not allow additional runs.

Ryu said that he wasn’t sure that he would win after the Dodgers began leading 3-2 in the third. Only when the Dodgers added another run in the fifth, did he see things differently, he said. The Dodgers had two more runs in the seventh.

“I am thankful for all of my colleagues that contributed to the victory,” Ryu said.

It is the first MLB victory for a Korean starter in nearly four years. Park, 39, was the last to have a starting win with the Philadelphia Phillies, against his former team the Dodgers on May 12, 2009. Park allowed two runs over six innings in the game, helping the Phillies win 5-3. Clayton Kershaw, now Ryu’s teammate, took the decision in the loss.

Ryu, who set his sights early on to surpass Park as the most winning Asian pitcher in the Major Leagues, is off to a good start. Park won his first Major League victory on April 7, 1996, two years after he trail-blazed the big league career for Koreans. Ryu, the first Korean to directly move from the Korea Baseball Organization league to the MLB, joined the Dodgers in December on a six-year, $36 million contract.

A total of 52,053 people came to Dodger Stadium to watch the game, the biggest crowd Ryu has pitched a winner in front of. The Korean, who built up an impressive 98-52 win-loss record in seven KBO seasons, said that he was just happy to win before the Dodgers fans.

“I am happy that I could contribute to the morale of the team,” Ryu said.

Dodgers center fielder Matt Kemp complimented Ryu. “The first inning was rough, but after that he shut them down,” Kemp told The Associated Press. “I told him that was all they were going to get today from him, and he did what we asked him to do. We scored some runs for him and got him the W. We know what our offense is capable of doing. And if we stay within ourselves, we’ll be a very successful team.”

Ryu’s victory followed two shutout performances against the Pirates by Kershaw and Zack Greinke, the two biggest names on a team with a deep pitching staff.

Ryu admitted that he felt pressured pitching behind Kershaw and Greinke (he lost the debut game a day after Kershaw recorded a four-hit shutout, the opening-day victory against the Giants). But Ryu added that he believes in himself and will pitch as well as them.

“I expect these guys to keep us in a ton of games,” Dodgers manager Don Mattingly told www.mlb.com, referring to the Dodgers’ pitchers. “I do expect us to pitch well. Every time out with our starters, I feel like we’re going to get a game that the guys are going to keep you in. They’re not just going to go out and throw duds very often.”

Ryu is expected to start against the Arizona Diamondbacks on Saturday Korean time. If he wins the next game, it will be his 100th career win as a professional.