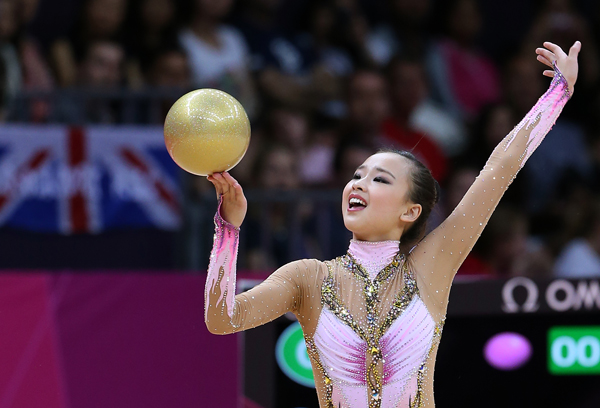 She earned 17.400 points in the ball finals of the FIG Rhythmic Gymnastics World Cup held in Lisbon, Portugal, finishing behind winner Margarita Mamun of Russia (17.700 points) and runner-up Ganna Rizatdinova of Ukraine (17.450 points).

This is the first time that the 18-year-old gymnast has won a medal in the ball discipline in an international competition. She previously earned medals in the rest of the disciplines - hoop, ribbon and club.

In Lisbon, she competed with a revised program with new music: Frank Sinatra’s “My Way.” Previously, she performed to “Georgia on My Mind” by Ray Charles.

The change worked well, and Son advanced to the eight-way ball finals in fourth place with 17.200 points.

“It was like the spectators were responding more to Son Yeon-jae than they did to Margarita Mamun, who finished first,” said Kim Ji-young, the head of the Korea Gymnastic Association’s rhythmic gymnastics training committee, who attended the event as a referee.

“?‘My Way’ is such a famous song so spectators could relate to her,” Kim said. “The judges also complimented her for the ball performance.”

Also in Lisbon, she finished fourth in the hoop finals and seventh in the ribbon finals. She was ninth in overall points.

It was a clear improvement from her last performance at the Grand Prix Moscow 2013 early last month, where she had the lowest points in both ball and hoop.

Son finished fifth in the all-around final during the 2012 London Olympics after committing several mistakes with the clubs. She immediately worked to improve in that discipline and won a bronze medal at the Grand Prix Moscow 2013, the first time she won a medal with the clubs.

In the clubs final in Moscow, she received 16.533 points. That outdid her ribbon final performance that placed her sixth place with 16.233 points.

“Since she was a child, Son Yeon-jae has tried to be a fast learner and wanted to see a better result in a next event,” Kim said.

Son is now focused on the Summer Universiade to be held in Russia in July and the World Rhythmic Gymnastics Championships in Ukraine in August, among other international events.