B.A.P’s American tour sells out within an hour

B.A.P’s American tour sells out within an hour 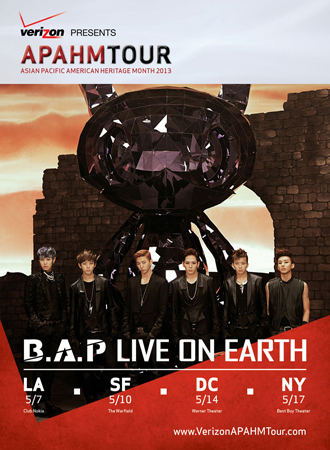 Tickets to a U.S. tour concert of boy band B.A.P were sold out within an hour after going on sale on Saturday, according to its agency TS Entertainment.

Around 2,500 tickets to each concert at four cities in the United States, including New York, Washington D.C., Los Angeles and San Francisco, were sold out, leaving many fans without tickets to place inquiries on the group’s agency for other arrangements.

“There has been a campaign among fans asking for more concerts or a change to a bigger venue,” said the agency.

“The operating team is releasing seats that were held for emergency to accommodate fans.”

The U.S. tour is being organized by Verizon, a major local network carrier there.

The tour dubbed “B.A.P Live on Earth Pacific Tour” garnered the public attention as the group decided to have a global tour only 14 months after its debut.