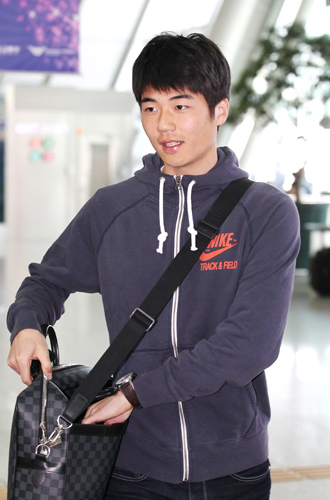 Footballer Ki Sung-yeung released a photo of his serenade for his actress girlfriend Han Hye-jin on a mobile messenger service, igniting speculation on their wedding again. In a photo posted on Ki’s Kakao Story yesterday, a number of tea candles are put together to make a heart-shape, and next to it, the initials HJ of Hye-jin are seen. As such show of affection is often used in proposals in Korea and considering the fact that Ki used a more private way to show the photo, local media reports asked whether the image had a deeper meaning.

Kakao Story, different from Twitter or similar social networking services, is considered more closed and is used among friends or close acquaintances. The service requires a friend’s mutual acceptance or mobile phone number in order to connect.

However, industry officials told local media that such speculation carries little weight as Han recently decided to take on a role in a movie tentatively named “When a Man Loves,” and the romantic photo can be simply Ki’s expression of love, and not more. Han is expected to start filming as early as the end of this month.