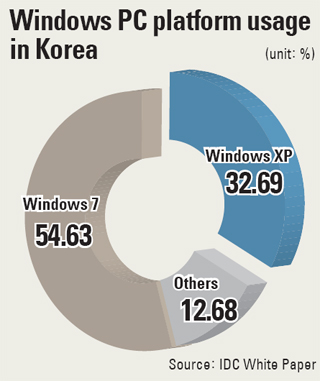 Microsoft Korea announced yesterday that Windows XP users should upgrade their operating system because it will terminate service and support for the 11-year-old system globally effective April 8, 2014.

Stopping the service means there won’t be any additional updates, up-to-date drivers, online technical service and security patches. “Continued use of Windows XP even after termination of support could expose users to security risks encompassing a variety of viruses, spyware and malicious codes,” said Microsoft Korea.

Korea has a relatively high number of Windows XP users. Compared with the global average of 23.4 percent that use Windows XP among all personal computers, the figure for Korea was 32.9 percent as of May last year, according to market researcher IDC White Paper. The average for Asia is slightly higher at 34 percent. Korea has 45.29 million computers.

“Under the complex environment of a range of sensitive and crucial services including finance, electronic commerce and electronic government for civilians being administered via Internet, the Windows XP, released in 2001, has limitations in offering a sustainably safe platform,” said the company.

The fact that Windows XP does not support versions beyond Internet Explorer 9 also underscores the need for migrate to an newer platform.

In Korea, despite its reputation as a global tech powerhouse as home of the world’s top smartphone producer Samsung Electronics and advanced wireless technologies, the level of security awareness is relatively low.

A report from the Korea Internet Security Agency in January showed that 57 percent of the world’s malicious code originated from Korea. Recently, Korea’s banks, broadcasting stations and even the JoongAng Ilbo have been hit by yet-to-be-identified hacker attacks. That raises the possibility that Korea falling behind in migrating from XP to newer operating systems would deal a bigger blow than seen in other countries.

Microsoft Korea says key local banks are scrambling to upgrade their systems and public institutions are expected to follow suit.