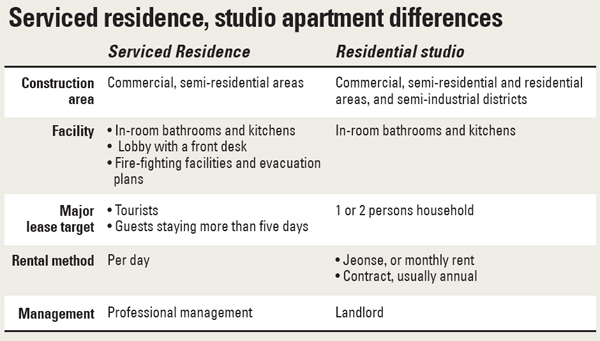 A 38-year-old surnamed Roh purchased a residential studio in Yongsan, central Seoul, as an investment in July 2011 and did not find a tenant until last month.

Unlike his initial anticipation that he would receive 800,000 won ($702) in monthly rent, it was difficult to find a tenant who would pay 700,000 won because a glut of studios decreased demand and lowered rents.

Then recently the housing company requested consent to change the use of the studio to a so-called “serviced residence.”

After Roh investigated, he found his monthly income could be 820,000 won if he leases his property to tourists.

“For studios, it is quite cumbersome and costly every time tenants leave, as I also have to pay brokerage commissions. But if I change it to a serviced residence, managing it will become more convenient, and it will yield higher profits,” said Roh.

Serviced residences are emerging in a real estate rental investment market that has long been led by studio apartments as they begin to grab the attention of investors who worry about an over-supply of residential studios.

According to the Korea Tourism Organization, the number of foreign tourists is expected to increase to 13.8 million by 2015 from 1.1 million last year, and there is a lack of accommodations for them.

In addition, just in time, there was a warning light in the investment market for studios this year due to the concerns over declining returns: More than 40,000 were sold last year alone.

It is easy to build serviced residences. They are legally classified as part of the lodging industry, but have fewer construction regulations than hotels.

It is also possible to convert studios to serviced residences by adding firefighting equipment with the consent of contractors.

Serviced residences also are popping up in tourist destinations, such as Island Marina in Seogwipo, Jeju Island, and Jeju Avillos in Samhwa Village, Jeju.

“The luxurious interiors, sauna and children’s swimming pools provide convenient relaxation areas where tourists can comfortably reside. That is the charm of the serviced residence,” said Lee Si-on, sales director at Island Marina.

Jongno and Mapo areas in central and western Seoul, which are close to famous tourist attractions, are optimal locales for serviced residences catering to foreign tourists.

However, there are also matters to be noted. Without the consent of contractors and in areas that don’t allow commercial accommodations, serviced residences cannot be built or operated.

In addition, there is a possibility that sales of existing studios and new construction could create an oversupply.