Nominee for maritime ministry under fire

Nominee for maritime ministry under fire 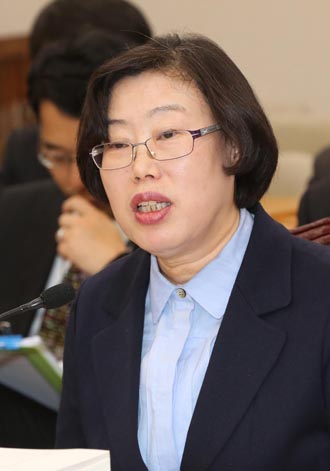 Objections from the ruling and opposition parties to President Park Geun-hye’s pick for the new maritime minister reached a new peak yesterday.

A ranking member of the ruling Saenuri Party yesterday urged the Blue House to make a “wise decision” over the nomination of Yoon Jin-sook as minister of oceans and fisheries.

“The requirements for a member of a cabinet are abilities to perform the job and the capabilities to control and oversee the ministry,” said Representative Chung Woo-taik, a member of the Saenuri Supreme Council. “But we could not find such abilities in Yoon.”

“There are 3 million people working in the maritime and fisheries industry and I wonder what they can expect from Yoon.”

He also said he cannot understand why Yoon wants to be the minister and what role she plans to play.

The 57-year-old head of the Marine Policy Research Division at the Korea Maritime Institute was named on Feb. 17 to head Park’s ambitious projects in the new Ministry of Oceans and Fisheries, but her weaknesses were pointed out by the lawmakers after the confirmation hearing.

The video clips of Yoon failing to answer questions also spread quickly among Internet users, prompting criticism about her lack of readiness.

Chung said yesterday that Yoon should make a decision to give up the post and pressured President Park to make a wise decision about the nomination.

Another Saenuri lawmaker, Kim Sung-tae, also said in an interview with CBS radio yesterday that the people won’t understand Yoon’s lack of preparation for the confirmation hearing, although she had more than a month to prepare.

He also said it is the job of a ruling party lawmaker to make public such a view through the media, expressing the Saenuri Party’s boiling complaints about the Blue House’s move to appoint her.

Yoon issued a statement Sunday and apologized to the public for having failed to gain their trust as a minister-nominee.

She, however, made it clear that she has no intention to give up the nomination, stressing that her past research is evidence enough to support her abilities.

She also claimed that she failed to answer the lawmakers’ questions properly because she was flustered.

She also brought up her gender, saying “the maritime and fisheries industries are relatively less open to women, and I think my appointment can be an opportunity for other women.”

The main opposition Democratic United Party, which has protested Yoon’s appointment, yesterday renewed its criticism toward President Park and the nominee.

“I could not find anything about her professionalism, sincerity and passion, not to mention her vision for the maritime and fisheries industries,” said Representative Kim Yung-rok, a member of the Agriculture, Food, Rural Affairs, Oceans and Fisheries Committee of the National Assembly.

“President Park must reconsider the appointment,” said Kim Jung-hyun, deputy spokesman of the party. “The Blue House is in no position to insist on the appointment.”

Despite the lawmakers’ protests, President Park has the right to appoint Yoon as the minister, and a senior presidential aide told local media that the Blue House will keep her.

Without the National Assembly’s endorsement, Park will need to wait until next Monday.

If Yoon gives up the nomination or the Blue House decides to replace her, she will make Park’s seventh botched appointment of top government officials.