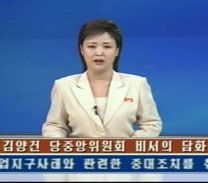 SEOUL - North Korea said on Monday it would withdraw its workers from the Kaesong factory park jointly run with South Korea and temporarily suspend all operations there.

"It will temporarily suspend the operations in the zone and examine the issue of whether it will allow its (continued) existence or close it, " its official KCNA news agency quoted Kim Yang-gon, secretary of the Central Committee of the Workers' Party of Korea, as saying.