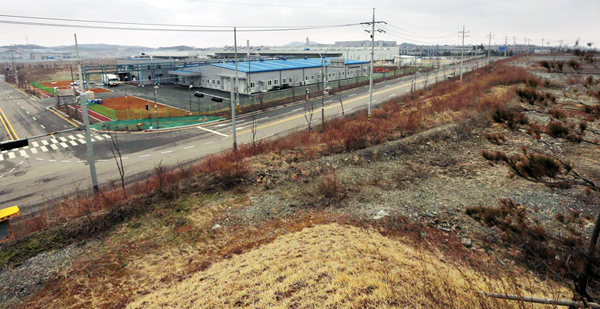 The industrial complex site for foreign companies in Hwaseong, Gyeonggi, is almost desolate, with few buildings in sight. By Oh Jong-taek

At 10 a.m. on Wednesday at the “No. 2 Jangan Foreign Investment and Industrial Complex” in Hwaseong, Gyeonggi, instead of a high-tech industrial complex there is only an empty plain.

The area is covered with overgrown weeds and trash. At the edge of the lot, a few concrete structures stand incomplete.

“A foreign investment and industrial zone was supposed to be built on this land, but since nothing has moved in, it has been like this for years,” a realtor told the JoongAng Ilbo.

The Jangan industrial complex was created in 2010 by the Hwaseong city government in order to attract investment from foreign corporations on the 368,900 square meters (91.2 acres) of land by investing 80 billion won ($71.2 million).

In the last three years, however, only four corporations, including Denso PS Electronics, a Japanese car components manufacturer, have moved in. About two-thirds of the land is empty. Another industrial complex created in Pyeongtaek, Gyeonggi, is worse off.

The Pyeongtaek city government created a similar industrial complex on 353,900 square meters of land in 2010 by investing 82 billion won, but 90 percent of the land is empty.

Only four companies including V-Tex, a Japanese semiconductor components manufacturer, have moved into the region.

All of these foreign industrial complexes have been created by the Gyeonggi Provincial Government.

They have created four industrial complexes by investing 300 billion won in total and have been attracting foreign capital by offering benefits, including tax reductions.

The situation in other regions nationwide isn’t so different from Gyeonggi.

According to the Korea Industrial Complex, a total of 17 foreign investment industrial complexes, including the four in Gyeonggi, are established in the country, but only one of them, in Inju, South Chungcheong, is fully occupied.

Since these complexes have failed to attract foreign corporations, not many merchants or hospitals have opened nearby businesses.

Some regions can’t even be reached via public transportation.

“We have to drive more than 10 minutes to go to a restaurant or to buy office supplies,” a 29-year-old worker Choi Bo-ra complained.

Officials in local governments and economy experts judge that the recent poor global economy that dived in 2008 has kept foreign corporations from making risky investments.

Four other industrial complexes were created for foreign investors between 1999 and 2007, and about 89 percent were occupied by foreign companies.

“We have been trying to attract more foreign investment to Gyeonggi by holding many presentations that advertised benefits,” a spokesman of the Gyeonggi government said.

“But not very many corporations are willing to move into a complex.”

Some local governments got themselves in trouble after bringing poor quality corporations and domestic companies into the foreign industrial zone.

“The local governments must provide solutions after discussing problems from foreign corporations that are hesitating moving into the country,” said Cho Deong-geun, economics professor from Myongji University.