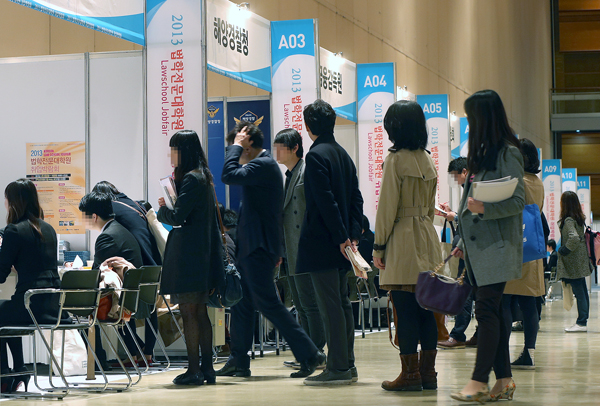 Many regional law school students remain concerned about their job prospects after graduation in the current oversaturated legal market, so much that they skip classes and rent a bus to head to a job fair held in southern Seoul.

Lee Kwang-hoon, a 30-year-old law student of Chungnam National University in Daejeon, and some 30 colleagues rented a school bus to attend the job fair at the Coex Convention & Exhibition Center in Samseong-dong in Gangnam District, southern Seoul, yesterday.

The two-day job fair which runs till today attended by some 1,000 participants saw leading law firms such as Kim & Chang and Bae, Kim & Lee represented, over 50 corporations, including Samsung Electronics and Hyundai Motor, along with representatives from the Ministry of Justice, Office of Court Administration and other legal government and public agencies.

Though a second-year law student, Lee said, “As I heard that upperclassmen were not able to find jobs, I felt nervous so I came here today. Though I am not in the graduating class, there’s nothing wrong with preparing early.

“It doesn’t make any sense to skip lectures,” he added, “but our professor said that for skipping one class today, we will be able to take a make-up lecture [tomorrow].”

“The era to rely simply on a specialty license to get hired is over,” said Kim Myung-gi, head of the Korean Association of Law Schools.

“Taking into account that some 6,000 law students - a large number of third-years - attended the job fair, reflecting the unemployment crisis, many law school students flocked to public agencies and stable companies.”

Initially, 400 students registered for the fair, many of whom are from regional schools.

Many were concerned about treatment in the workplace as well as if they would be paid enough for their abilities.

These students were able to attend the job fair on a weekday because of their schools’ cooperation. Law schools such as Inha University in Incheon or Wonkwang in North Jeolla canceled lectures for the day and even provided rented buses.

Pusan University even paid gas fees for its students who drove to Seoul by car.

A Cheju National University faculty stated, “We provided airplane fare for the 14 students who wanted to attend the fair, taking into consideration that we may be alienated because we are in a rural area.”

National Assembly data showed that the first batch of graduates in February 2012 from the newly implemented three-year, Western-style law schools saw an employment rate of 81.7 percent.

Some 89.1 percent of law graduates from Seoul found employment, compared to 74.5 percent of those from schools outside of Seoul, showing the discrepancy in the employment of Seoul versus non-Seoul law students. Students who were not Seoul law school graduates found difficulty being hired by large law firms.

A 31-year-old law student of Inha University said, “Many people around me have given up on being hired by a large law firm. We came to find information on more realistic options such as public institutes or government offices.”

And to further alienate those from rural law schools, leading law firms and large corporations hold a separate job fair for students of the top three universities - Seoul National, Korea and Yonsei.

Most Seoul-based law schools did not cancel classes, unlike those in the regional schools.

Song Seon-bae, a 35-year-old Yonsei Law School job counselor, said, “I came to benchmark the fair today for our own job fair held on campus at the end of the month.”