Montages give true impressions of friends

Montages give true impressions of friends 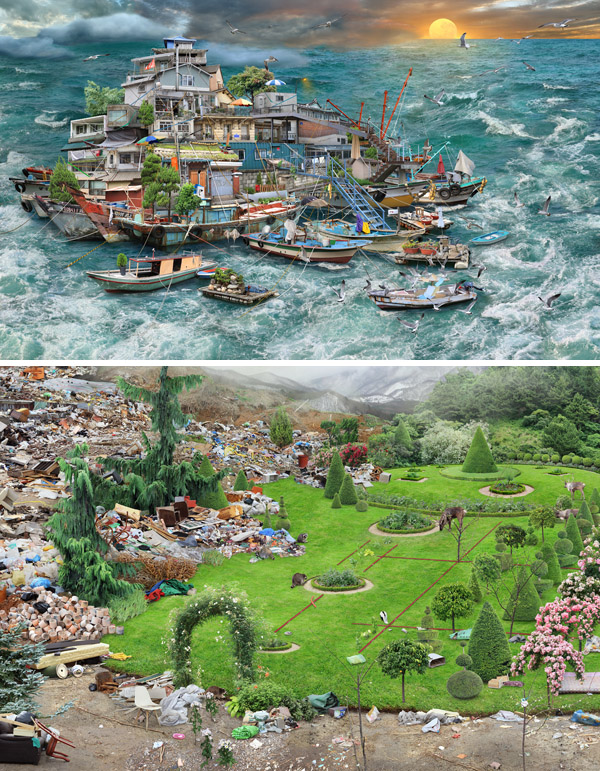 “The Ark of Obsession,” top, and “The Perfect Garden” are artist Won Seong-won’s unique inner portraits of her friends. They are part of her solo show at Artside Gallery in central Seoul that starts tomorrow. Provided by the gallery

Artist Won Seoung-won, known for surrealistic photomontages based on her everyday life, will show inner portraits of her friends in a solo exhibition starting tomorrow.

How can a person’s inner portrait be made with photos? An example is “The Ark of Obsession,” which is among Won’s works that will be on display at Artside Gallery west of Gyeongbok Palace in central Seoul. It depicts an ark carrying local houses in a stormy sea with an ominously shining moon on the horizon. Seagulls fight over house deeds.

“This is about a friend of mine in his early 40s whose only interest is investment in houses,” Won said in a press preview on Monday. “He is a very good man in various aspects except for the obsession with houses, about which I am losing patience. But there is a sad story about that. His ex-girlfriend dumped him because he didn’t own a house.”

Accordingly, this work is not only a certain man’s portrait but could be that of an average Korean obsessed with the idea of owning a house.

“He always talks about investment in houses, so I asked him what he will do with his houses if doomsday ever comes,” the artist said. “He was so surprised to hear that, and I have made this work to heal him.”

The works about other friends include “The Perfect Garden.” It depicts a small, excessively neat garden surrounded by chaos.

“It is about an old lady in her 80s who believes she has led a perfect life and always demands others live like her,” the artist said. “But in my view, she did not live a totally perfect life, which is impossible for anybody, and, as she focused on some small things to be perfect, the others were left in a mess.”

As for her subjects, the artist said she picked several people she has known for at least 15 years with certain characteristics about which she has grown impatient. Still, these works seem to carry not only sarcasm about the friends but some sympathy as well. The artist admits it.

“Yes, making the works, I have come to understand them better and have discovered my own similar problems in them.”

Won created such images by combining parts of real photos she took in various parts of the country and sometimes overseas. As the 41-year-old artist combines the parts one by one, it takes even longer than painting, she told the press.

The show runs through May 9. Admission is free. The gallery is open from 10 a.m. to 6 p.m. Tuesday to Sunday. It is closed Monday. Go to Gyeongbokgung Station, line No.3, exit 3, and walk for 5 minutes.