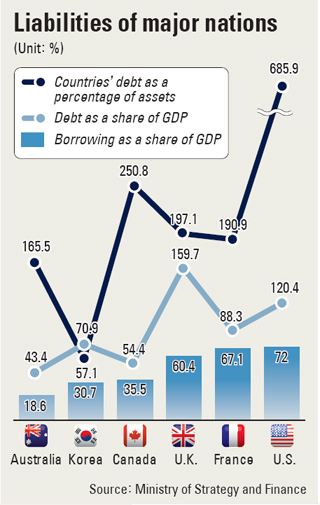 Despite the government’s repeated emphasis on fiscal soundness, national liabilities are snowballing, triggering worries about the country’s financial health.

Korea’s aggregate liabilities stood at 902.4 trillion won ($791.9 billion) in fiscal year 2012, up 128.9 trillion won, or 16.6 percent, from the previous year, the Ministry of Strategy and Finance reported yesterday.

It was the second year that the ministry has released the annual government financial statement. The surge in liabilities stemmed mainly from an increased number of soldiers and civil servants. In addition, the ministry said national pension payments for the rising elderly population jumped 94.8 trillion won to 436.9 trillion won.

Issuances of Treasury bonds, aimed at stabilizing fluctuations in the foreign exchange market, also contributed to the growth, were 22.8 trillion won last year. The country’s assets grew by 58 trillion won to 1,581 trillion won, showing that the growth of liabilities surpassed that of assets, according to the data.

“Compared to major countries, Korea’s liabilities-to-asset and liabilities-to-GDP ratios are at appropriate levels at the moment,” the ministry said. “The government’s burden for the pension payments is about 34 percent of the country’s GDP, which is not so high compared to other countries.”

Besides liabilities and debt, Korea is seeing a significant amount of debt piling up at public corporations. As of late last year, the country’s eight largest public corporations had a combined 324 trillion won in debt, up 33 trillion won from a year earlier, according to data compiled by the Fair Trade Commission. That is about 25 percent of GDP. Thus companies have total assets of more than 5 trillion won.

Their debt was greater than the aggregate debt of the top five conglomerates - Samsung, Hyundai Motor, SK, LG and Lotte - which stood at 303 trillion won. If you do the math, every person in the country is potentially responsible for an additional 6.5 million won in debt. Korea Land & Housing Corporation has debts of 138 trillion won, the largest among the public companies. Its debt-to-asset ratio is as high as 467 percent. The company borrowed money to finance funds for the government’s new town and housing projects. Korea Electric Power Corporation reports 95 trillion won in debt. Korea Gas Corporation and Korail, which was the largest stakeholder in the collapsed Yongsan International Business District development plan, have 31 trillion won and 14 trillion won in debt, respectively. Korea Water Resources Corporation, or K-water, used to maintain a relatively healthy financial status until before it participated in the former government’s four-rivers restoration project. The company had more than 8 trillion in capital. The Lee Myung-bak administration used K-water’s capital to pay for part of 22 trillion won in refurbishing work for the four rivers. Since then, K-water has had to rely on loans and built up a debt of 13 trillion won.

The Finance Ministry is preparing a financial statement that takes the total debt and liabilities of 44 public institutes into account based on international standards, which will be released next March for the first time.

“The government is well aware of the impact of growing debt at public corporations,” said Lee Seung-hyun, a finance ministry official.