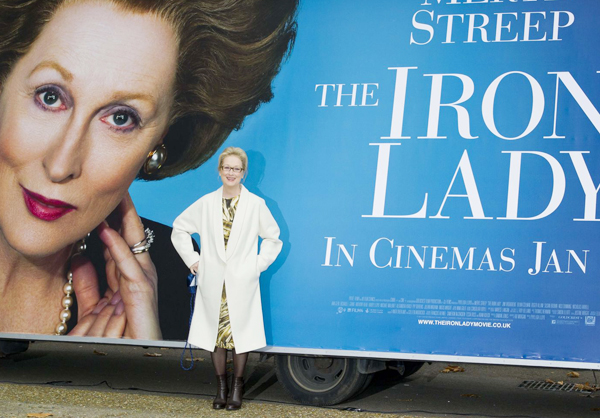 LONDON - Actress Meryl Streep, who won an Oscar for her portrayal of Margaret Thatcher in the 2011 film “The Iron Lady,” praised the former British prime minister on Monday as a pioneer for the role of women in politics.

Britain’s first and only female political leader died on Monday, aged 87, after suffering a stroke.

Streep, 63, described Thatcher as a trailblazer, “willingly or unwillingly”, for female political leaders. “To me she was a figure of awe for her personal strength and grit,” the American actress said in a statement.

“To have given women and girls around the world reason to supplant fantasies of being princesses with a different dream: the real-life option of leading their nation; this was groundbreaking and admirable.”

Streep paid tribute to Thatcher for rising to the position of prime minister from her upbringing as a grocer’s daughter on the back of her own hard work.

The multi-Oscar-winning actress acknowledged that the right-wing Thatcher divided opinion. But Streep said Thatcher deserved credit for standing by her convictions despite the “special hatred and ridicule, unprecedented in my opinion, levelled in our time at a public figure who was not a mass murderer”.

Streep said she was honoured to try to imagine Thatcher’s late life journey in playing her in “Iron Lady” but only really had a “glancing understanding” of Thatcher’s struggles.

“I wish to convey my respectful condolences to her family and many friends,” she said.