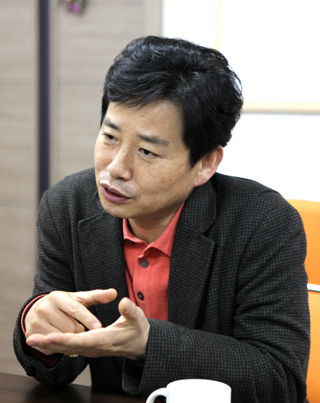 Looking at young girls and boys chitchatting for hours at a small cafe with cups of coffee in front of them always gives Ji Young-goo a bland smile. It reminds him of the old days during the 1960s and ’70s, when he used to date his current wife at a dabang, or Korean coffee house.

Ji, chief editor of the monthly magazine Coffee & Tea, wishes for a revival of the ’70s nostalgia, but knows that it needs to “remain as a faint memory.” Instead, his affection for coffee and the whole coffeehouse culture led him to start up a business of publishing a monthly magazine related to coffee and tea.

The Korea JoongAng Daily recently had an interview with Ji at his office in Yangjae-dong, southern Seoul. Here are some excerpts from the interview.

Q. The coffee market in Korea has been rapidly expanding. But I hear you have some concerns regarding such rapid growth. What concerns you the most?

A. I have to say that the country’s coffee market has been overly focused on only the external development. For example, showy and very sophisticated coffee shops can be spotted everywhere. Especially in Seoul, ground floors of business buildings are occupied by coffee shops, yet they are always bustling with people waiting to grab a cup of coffee. But while we were all running after the “flower,” we neglected its weak roots and stem. It may look posh and successful on the outside, but if a strong wind blows, it will be pulled out.

The amount of annual coffee imports increased by 1.5 times over the past decade, however, the cost surged sevenfold. That’s because the cost of new crops, which refers to fresh coffee beans before they are roasted, at the global futures market has doubled over the years. As time goes by, the competition from secure high-quality new crops will become fierce. And if the massive Chinese coffee industry decides to jump into the competition, the cost of beans will increase, making it inevitable that Korea’s coffee industry will suffer.

So it is essential for Korea to prepare for soaring prices of fresh coffee beans that will occur following the imbalance between supply and demand. In order for Korea’s coffee industry to put down strong roots, we should join the International Coffee Organization (ICO), which acts as a global mediator of the coffee industry. The ICO is the main intergovernmental organization for coffee that brings together exporting and importing governments to tackle the challenges facing the world coffee sector through international cooperation. Its member governments represent 97 percent of world coffee production and over 80 percent of world consumption. Its mission is to strengthen the global coffee sector and promote its sustainable expansion in a market-based environment for the betterment of all participants in the coffee sector.

I believe there’s an oversupply in the country’s cafe industry.

That’s true. The number of coffee shops increased so suddenly in a short period of time. It actually began two or three years ago. Compared to the pace of the increasing number or frequency of people drinking coffee, the number of new cafes opening up is faster. Last year, such oversupply reached its peak. Starting this year, I want to say that the country’s cafe industry will go into a phase of catching its breath for about three years. Many cafes that are systematically vulnerable will close. And when they get their strength back, they’ll open again.

You’ve interviewed many foreigners working in the coffee industry in their own countries for your magazine. What have they said about Korea’s coffee industry?

As far as I’m concerned, they were critical of Korea’s coffee market. Korea’s coffee market has seen a rapid growth over the past five years and during that period, coffee-related associations and corporations have sprung up here and there. There’s KCA, known as the Korea Coffee Association; KCES, the Korea Coffee Education Society; SCAK, known as the Specialty Coffee Association of Korea and many more.

From a foreigner’s perspective, it may seem to be too many. When they want to hold an international event in Korea, for instance, what they see is a bunch of associations squabbling and competing to be the co-hosts. They compete rather than cooperate. All these different groups should join hands and combine their capabilities.

But what these foreigners misunderstand is that despite Korea being the 11th-largest coffee market, we are still in an early stage of development. It’s just that Korea’s coffee market began to draw interest from abroad following its rapid growth in a short period of time. It’s natural for these groups to start separately. Soon, we’ll join hands and form an integrated association that can represent Korea’s coffee industry.