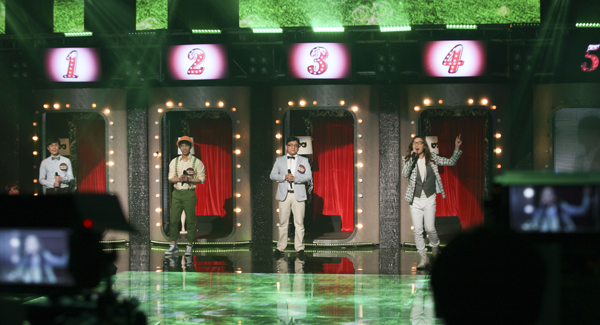 Singer Kim Jong-seo comes out from behind the curtains to an audience that has been trying to tell the real Kim from the fake. Provided by JTBC

Singer Sol B says she is dead sure, while an elderly actress keeps sighing as she guesses candidate No. 1, then 2, then 3 to be the real deal.

Stars sitting on the panel are all stumped, despite having said that it’d be a no-brainer earlier given that this week’s featured artist was a trot sensation best known for her unique voice.

Meanwhile, on the stage, contestants behind capsules numbered one to six hold their breath, hoping that they won’t get booted after just the first song. Among them is one of the nation’s best-loved trot artists, Jang Yoon-jung.

It’s a typical recording day at JTBC for the new variety show “Hidden Singer” and you can cut the tension in the studio with a knife.

As the drum beats roll and votes are cast, the celebrity judging panel and 100 audience members tilt their heads back and forth in concentration.

“My mom chose No. 2 and asked me to do the same, so I just followed along,” explains one audience member. And you can’t blame the girl because all of the six singers did sound alike, and there seem to be no rules, just your senses to rely on.

Although it only began airing in late December, the show’s ratings are growing each week, and it’s easy to see why. It’s a singing show that anyone can critique. You don’t need to be an expert in music. A good ear, or two, is all that matters.

Each week, a singer is selected, and five wannabes too. The six performers battle it out by taking on a verse or two behind drawn curtains.

Before the rendition of her hit song “Eomeona” minutes ago, Jang sounded so confident. “The writers said that I’d be crying by the end of the show, but to be honest, I’ve never met someone who could pull off my mimicry.”

But hiding behind the capsule, Jang may have changed her mind.

In a market nearly oversaturated with singing-survival and reality shows, the JTBC show is the first of its kind in that it pits celebrities against average Joes, albeit ones with exceptional voices.

After the success of two pilot episodes featuring Park Jung-hyun and Kim Kyung-ho, two of Korea’s favorite singers with very distinct flavors, a season of 12 episodes was given the go ahead by the network.

Helmed by the longtime variety show program director Cho Seung-wook, the production team spends its time deciding on celebrity singers as well as searching far and wide for those who are able to pull off A-grade imitations of the singers selected for the episodes.

After finding the diamonds in the rough, these wannabe singers are trained for as long as three weeks before the big night where they’ll battle it out against each other as well as with the singer by singing four songs

Verse after verse, audience members prick up their ears while trying to discern the differences between the star and impostors.

In this hybrid TV show that is part-quiz show, part-singing-survival and part-concert, the real singer gives it all they’ve got to show their “true talent” while the impostors also do their best to get a share of the limelight.

And as impostors are usually niche-market singers, their fate brings a new dimension to the singing program genre.

“It’s so hard to make it as a trot artist, so opportunities like these are so rare” said one contestant eliminated second in the Jang Yoon-jung episode.

“Really, it’s so touching to be here,” she went on while shedding tears before making an emotional exit.

Weeks before on the Lee Soo-young episode, there was another touching moment when Lee thanked one of her contestants for “reminding me why I sing.”

In fact, each week is a sort of tearfest as contestants faced with their beloved star give short testimonies on how a song, or an artist, has changed their life.

And the show seems to have hit a chord with viewers, too. It perhaps signals a new era for singing-survival shows where the heart behind the talent is valued as much, if not more than, the performance itself.