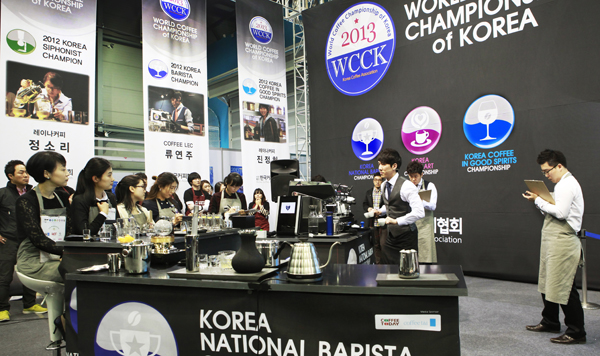 Barista Kim Jin-kyu, 29, the winner of the Korea National Barista Championship, shows his routine in front of the judges on March 28 in Setec, southern Seoul. By Park Sang-moon

A large digital clock above barista Kim Jin-kyu, 29, ticked off toward 15 minutes and Kim’s hands shook a little as he poured the last cup of espresso.

“This is the end of my show,” said Kim as the ?clock stopped at 14:56. He was just in time. Kim was the first among six contestants who made it to the finals of the Korea National Barista Championship on March 28 at Setec convention hall, southern Seoul. As the national champion, Kim will ?represent? Korea next month in Melbourne, Australia, in what is generally known as the Olympics of the coffee world, the World Barista Championship.

“For me, coffee is what I enjoy the most. I started off doing latte art to pick up girls,” said Kim half jokingly. “But now, I can’t describe what I would do except coffee.”

Kim placed fourth in the World Latte Art Championship in 2011, which was held in Thailand.

“Many people said those who are good at doing latte art are bad at pulling out a great espresso, but here I am,” said Kim. 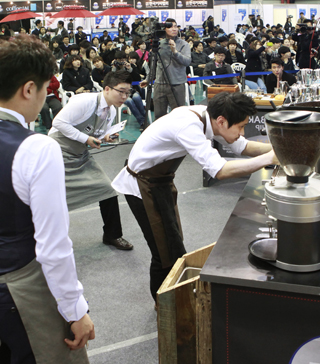 As a spectator sport, this world barista competition started in 2000. Representatives of each country gather together ?to seize the world champion title. During the competition, baristas must prepare four sets of three distinct drinks using a coffee of their choosing: An espresso, a cappuccino and a “signature drink” of their own creation. Two technical judges shadow the baristas to evaluate cleanliness, workflow and organization. Four sensory judges score the drinks themselves, basing their evaluation on, among other criteria, taste and balance. A head judge oversees the judging. This year’s championship will be held May 23 to 26 in Melbourne.

But the competition is not simply about the ability to pull a great shot of espresso. While the baristas prepare the drinks, ?they need to present an idea to the judges, with the coffee essentially used to illustrate main points.

Compared to other contestants, Kim’s table looked like a science lab rather than an espresso bar. For his “signature drink,” which used orange and sparkling water as ingredients, Kim used test tubes instead of glass cups.

“To add the exact amount of ingredients, I like to use these tools,” said Kim as he used a syringe to “inject” the sparkling water into the test tube.

“Cocktails use different glasses to fully enjoy the taste of each cocktail. The same goes for coffee. It tastes different according to the size of a cup,” said Kim. “I want other baristas to think outside the box and try to experiment more.”

Kim’s “experiment” was a success and the judges gave him the highest score.

Most baristas begin to prep their routine in earnest in the months before the championship. Kim says he too had to spend most of his time since the beginning of the year focusing exclusively on the competition: to get main ideas solidified, choose the coffee, perfect his signature drink, write and memorize the script and practice his routine repeatedly. There are other aesthetic considerations, such as picking cup ware and compiling a soundtrack to complement his routine. Kim even visited a fortune teller.

“The fortune teller told me that a blue color will give me good luck,” Kim said, explaining why he chose to wear a blue necktie, blue gloves and used a blue water bottle.

Korea has witnessed a great boom in the coffee industry. There are coffee shops in every corner of the country. First floors of tall buildings in business districts are always occupied by coffee shops. Especially in Seoul, coffee shops are clustered together, having at least one coffee shop every few meters, yet most of the shops are bustling with customers waiting in line to order a cup of coffee.

“I can name 20 different championships that are being held annually off the top of my head,” said Ji Young-gu, chief editor of the monthly magazine Coffee & Tea, insisting that he has “doubts about its significant effect.”

“The fact that such competitions draw people to be more interested in coffee and the career of a barista makes me want to support such competitions,” said Ji. “However, there are too many of them in such a small country, considering the tremendous amount of money it costs.”

Moreover, Ji argues that the organizers of the championships fail to give the winners a sufficient amount of support.

“After praising them by picking them as the champion, the organizers don’t do much else. As a winner, you expect to receive either media attention, or if you are an owner of a cafe, you would expect your cafe to bustle with customers and if you are a cafe barista, you would want your boss to raise your salary. But the reality is nothing like that. I’ve seen so many baristas who have won such championships, ending up falling in despair,” said Ji.

Ji also said that a similar situation will apply to Kim, the winner of the National Barista Championship.

“They name him the winner and the national champion, but fail to support him ?to come back with a good result. I think it’s the organizer’s job to support the champion they’ve selected, ?by providing excellent coffee beans, helping him write a scenario and advising him while he practices his routine. There needs to be somebody who ?coaches the winner so that he has a higher chance of winning the world championship, competing with experienced baristas from across the globe. But there weren’t any of those supports so far,” said Ji. “Last year, national champions from Korea in various categories who competed in the world tournaments for baristas, roasters, latte art and so on couldn’t even make it to the top ten.”