The brain behind the show sees a successful future

The brain behind the show sees a successful future 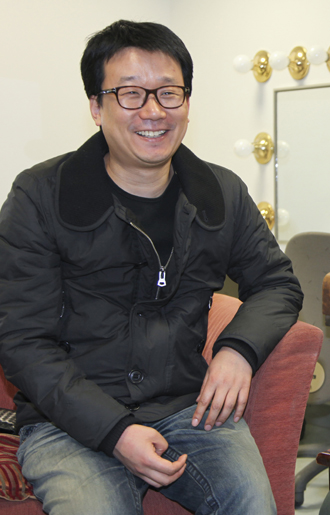 As “Hidden Singer” amasses followers, there is even talk that an international buyer is interested in the Korean-made program, setting a new standard in the singing-survival genre, which is usually imported from the West.

As the show gains popularity, its mastermind Cho Seung-wook sat down with the Korea JoongAng Daily to talk about his ingenious conception.

Q. What do you think is the show’s biggest advantage over other singing-audition shows on TV?

A. The fact that a singer and their impostors take to the stage together is a new thing. So it’s its own genre in a way.

How did you come up with the idea for the show?

The program’s writers and I noticed that shows with everyday people were huge these days. Then we started thinking how great it would be to have them on the show competing against celebrities.

What are the criteria for the celebrity singers picked each week?

First they have got to be loved and well-known by the public with at least three or four hit songs. And second, their songs have to be easy to sing along to, which means naturally that there will be a lot of impostors.

As yet, you haven’t featured an idol singer. Is there room for idols on the stage?

Not this season, no. But there is that possibility for next season. To date, we’ve placed the focus on soloists, and as most idol groups have many members, it would be hard to pick one idol singer for the show when they only sing a verse within a song.

How does the recruiting process for the impostors work?

The show is new, so we’ve placed an ad on the JTBC Web site, but not too many singers so far have come by that route.

Our staff has sifted through countless videos uploaded by the singers themselves online to find the talent. When we find singers who have done a good job imitating a singer, we go and track them down. It’s a lot of legwork on the staff’s part.

As we are not an audition show, the process is a bit different from the usual singing-survival format where the contestants come to you.

Have you found people offline?

We’ll tap into every resource - like singing academies for one. Once we have a pool of candidates, we have the preliminary session and then the five are selected from this pool. We have about five to eight that make it through the preliminaries.

We’ve had a blind contestant on the show, and our own writer once made an appearance too, making it to the final rounds. Although it seemed impossible at first, you can find talent anywhere.

Once the talent has been secured, how long do they practice for their TV performances?

It varies from one individual to the next. Sometimes we find singers that are just brilliant from the get-go that don’t need much time to rehearse.

But on average, singers spend about three weeks rehearsing part time. As most candidates have day jobs too, we can’t really set a big chunk of time aside. Again, it varies from one case to the next.

As the program director, are you able to sort out the real from the fakes by now?

Yes, I can. The thing about voices is that, you get better at telling them apart the more you hear them. Usually the in-studio audience gets better at picking after each round, too. I guess because I also see the rehearsal process, we are able to notice the difference, but of course, we get it wrong at times.

Compared to other singing-survival shows where each episode builds on the next, “Hidden Singer” is a separate show each week. How do you manage to keep the viewers tuning in?

Foremost, the show is on a different footing compared to other audition shows. If anything, it’s a program on a specific singer, accompanied by everyday people.

And our impostor singers are usually big fans of the singers they are mimicking as they’ve sung their songs for 10 or so years and have become experts at it, which makes it an interesting watch. Furthermore, our show isn’t a celebrity against a celebrity like “I Am a Singer” or a battle of amateurs like “Super Star K.” It’s a show where professional entertainers and amateurs come together for 100 audience members who get to cast their votes.

Nevertheless, there are some similarities to shows like “Voice of Korea,” where the judges can’t watch the singers perform. Do you think that blind-testing is the future of singing-survival shows?

I think that, at least in Korea, variety shows that are entertaining as well as touching will fare well.

And as with most things in life, we like to push the envelope in the entertainment industry. It’s important to meet the cultural demands while being creative, entertaining and touching.

I imagine you have run into all sorts of trouble as the show is still in its early stages. What are some things you’ve learned along the way?

As we come into contact with these impostors, I’ve come to know that they are fans who have been loyal followers of singers for years and years. It reiterated just how significant and life changing music can be in life of individuals.

To think a song can help an adolescent through life, or help them dream big, is quite powerful. Also, it’s been great to rediscover old artists. To be a part of something like this is quite amazing.

So there’s been talk of an international buyer interested in the show. Do you think the program would do well abroad too?

It’s not set in stone, but we’ve had talks with a network in China. There are similar shows like “Hidden Singer” around the world where everyday people dress up as specific singers and perform. There is a big impostor culture, especially in places like England, so I think it has potential to do well there abroad.

Of the talents who have appeared on the show, have any gone on to bigger things?

One singer did sign with an agency right away, while other amateur singers who used to sing for a living have received calls from agencies that want to sign them.


Can viewers expect any sort of grand finale?

After the 12 episodes this season, we’ll hold a sort of competition where the winners of the previous shows will compete against one another. That will bring an audition-show flavor to the program.