Household loan value dips, but likely not for long

Household loan value dips, but likely not for long 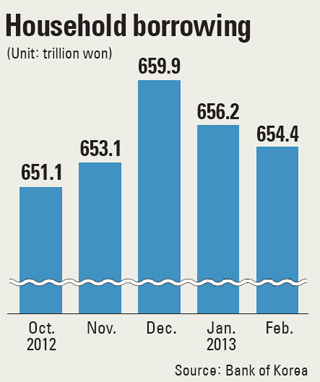 The value of household loans declined for the second consecutive month in February, but at a slower rate than in the previous month.

According to the Bank of Korea, household borrowing from commercial banks and nonbank institutions was 654.4 trillion won ($574.3 billion) in February, 1.8 trillion won less than the 656.2 trillion won in January.

Borrowing in the last quarter of 2012 was boosted by the Lee Myung-bak government’s exemption on capital gains tax for sellers of apartments. The value of household loans grew to a record 659.9 trillion won in December.

But the tide quickly turned when the exemption expired, and loan value fell nearly 3.7 trillion won in January, the sharpest drop since 2003.

Although the trend likely continued in March, in coming months borrowing is expected to surge, thanks to government measures announced earlier this month that include easing the debt-to-income and loan-to-value ratio requirements for home loans.