Choo makes up for blunders as Reds bury Cards

Choo makes up for blunders as Reds bury Cards 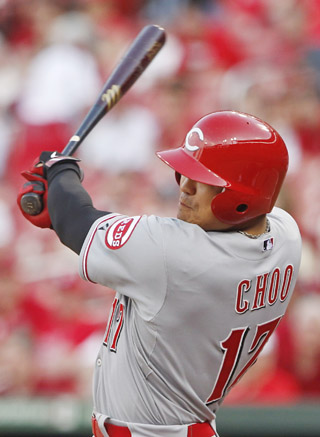 ST. LOUIS, Missouri - Choo Shin-soo is way off the hook.

The new Cincinnati center fielder made amends for two botched fly balls, drawing a leadoff walk in a nine-run ninth inning and later hitting a three-run double as the Reds spoiled the St. Louis Cardinals’ home opener with a 13-4 victory on Monday.

“I almost died and my teammates gave me another life,” Choo said. “I really appreciate my teammates, coming over to me and saying everybody makes mistakes.

“I missed two fly balls and in my mind I had to do something to help the team.”

Mitchell Boggs (0-1), the stand-in closer for St. Louis, yielded six runs while getting only one out. Only a few thousand fans remained of the largest regular-season crowd of 47,375 for the bottom of the ninth in eight-year Busch Stadium history.

Brandon Phillips blooped a go-ahead double in the ninth. He earlier hit his 150th career homer for the Reds, who have won six of seven since losing in extra innings to the Angels on opening day and totaled 11 or more hits the past four games.

Jay Bruce had four hits and Chris Heisey doubled twice with an RBI.

Sam LeCure (1-0) pitched an inning for the win.

Cardinals lefty Jaime Garcia matched his career best with 10 strikeouts in 6 and two-thirds innings and left with a 4-3 lead. Yadier Molina hit both of the fly balls dropped by Choo in the first and sixth, and added an RBI single.

Pinch-hitter Xavier Paul tied it in the Reds’ eighth with an RBI single off Trevor Rosenthal before the Reds took off in the ninth with six hits, five walks and an error. The Cardinals last surrendered nine runs in the ninth in a 12-9 loss at Colorado on July 6, 2010.

Before the game, Stan Musial’s four children unveiled an oversized red No. 6, the Hall of Famer’s retired jersey number, on the wall in left-center. The decal matches memorial patches worn on the team’s uniform sleeves.

Choo entered the season with 652 games of outfield experience but only 10 in center, and all 155 games with the Indians last year as the right fielder. Two runs scored in the first when Choo twice juggled Molina’s fly ball after backtracking, and Matt Holliday scored from first to put the Cardinals up 4-2 in the sixth when the ball popped out on Choo.

It was the second two-error game of Choo’s career, the other coming on May 25, 2011, against the Red Sox. He’s the first Reds center fielder to commit two errors in a game since Deion Sanders on April 28, 1995, against the Padres.

“You get a little gun-shy out there, it happens,” Baker said. “It’s a new position, a new league, a new park. Those balls went 400 feet, it’s not like they were just fly balls.”

Reds starter Mat Latos allowed one earned run in six innings, shaving his ERA to 10.23 in five career starts at Busch to 10.23.