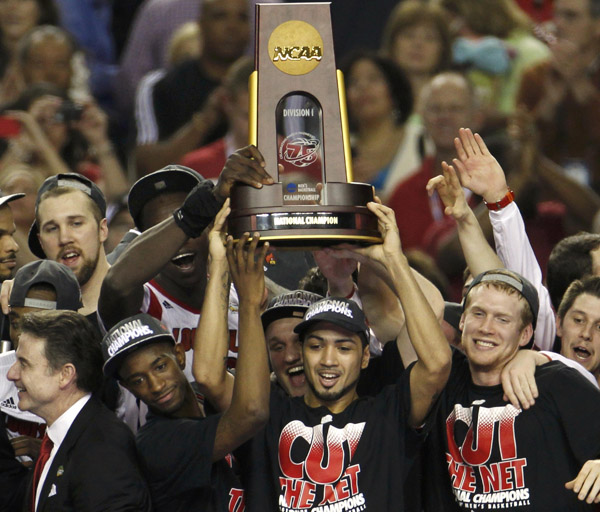 ATLANTA, Georgia - What a week for Rick Pitino! He’s elected to the Hall of Fame. His horse is headed to the Kentucky Derby. His son gets a prominent head coaching job.

Then he caps it off with what he wanted most.

For that, he can thank 13 of the grittiest guys he’s ever coached.

Luke Hancock produced another huge game off the bench, scoring 22 points, and Pitino became the first coach to win national titles at two schools when Louisville rallied from another 12-point deficit to beat Michigan, 82-76, in the NCAA championship game Monday night.

“This team is one of the most together, toughest and hard-nosed teams,” the coach said. “Being down never bothers us. They just come back.”

Earlier Monday, he was introduced as a member of the latest Hall of Fame class. On Saturday, his horse won the Santa Anita Derby to set up a run for the roses. And last week his son got the coaching job at Minnesota.

The Cardinals (35-5) lived up to their billing as the top overall seed in the tournament, though they sure had to work for it.

Louisville trailed Wichita State by a dozen in the second half before rallying for a 72-68 victory. This time, they fell behind by 12 in the first half, then unleashed a stunning spurt led by Hancock that wiped out the entire deficit before the break.

“I had the 13 toughest guys I’ve ever coached,” Pitino said. “I’m just amazed they could accomplish everything we put out there.”

While Pitino shrugged off any attempt to make this about him, there was no doubt the Cardinals wanted to win a national title for someone else - injured guard Kevin Ware.

Watching again from his seat at the end of the Louisville bench, his injured right leg propped up on a chair, Ware smiled and slapped hands with his teammates as they celebrated in the closing seconds, the victory coming just 30 miles from where he played his high school ball.

Ware’s gruesome injury during the regional final will forever be linked to this tournament. He landed awkwardly, snapped his leg and was left writhing on the floor with the bone sticking through the skin. On this night, he hobbled gingerly onto the court with the aid of crutches, basking in a sea of confetti and streamers.

Louisville again came out wearing Ware’s No. 5 on the back of their warm-up jerseys; the front said, “Ri5e to the Occasion.” When the title belonged to the Cardinals, Ware put on a championship cap and got a big hug from Pitino. Then, they lowered the basket so the injured player could cut a strand out of the net.

This one belonged to him as much as anyone on the court.

Peyton Siva added 18 points for the Cardinals, who closed the season on a 16-game winning streak, and Chane Behanan chipped in with 15 points and 12 rebounds as Louisville slowly but surely closed out the Wolverines (31-8).