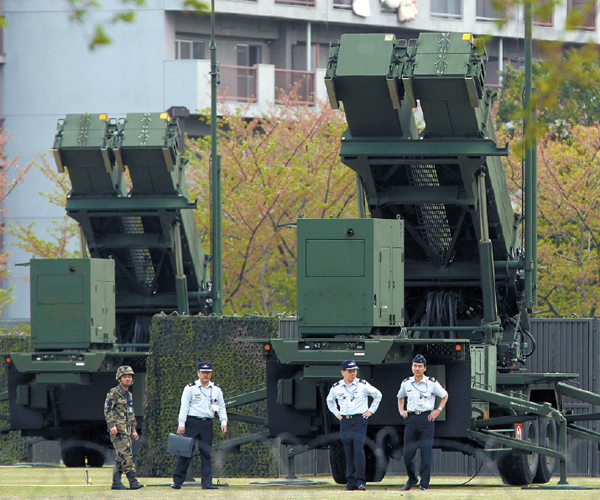 Amid international unease over an imminent missile launch from Pyongyang, North Korea warned foreigners in the South to evacuate to avoid military contact yesterday.

“We do not wish harm on foreigners in South Korea, should there be a war,” stated the Korea Asia-Pacific Peace Committee, the North’s state organ that deals with noncommunist countries and inter-Korean affairs, through the North’s official Korean Central News Agency.

The committee requested all foreigners, including tourists and foreign institutions and enterprises “to take measures for shelter and evacuation in advance for their safety” in a statement yesterday.

The Blue House responded yesterday that such psychological warfare will not shake the foreign community and Koreans in the South.

“North Korea’s psychological warfare using foreigners in Korea will not work here and agitate us at all because Koreans, of course, and foreigners residing in Korea, have great trust and faith in our army and [South Korea],” stated Blue House spokeswoman Kim Haing in response to the North’s statement.

The warning comes as sources revealed yesterday that North Korea tipped off select foreign diplomats in Pyongyang on Friday about its plans to launch mid-range missiles toward the East Sea as early as today.

Further sources indicate that the missiles are thought to be the intermediate-range Musudan, which reportedly has a range up to 4,000 kilometers (2,485 miles), which can reach Guam, a U.S. territory, though it will not be able to reach the continental United States.

After Pyongyang ordered the halting of the Kaesong Industrial Complex on Friday, foreign diplomats were told last Friday that North Korea “plans to launch a missile toward the Pacific Ocean, over Japanese territory, as early as [today],” reported Japanese daily Sankei Shimbun yesterday.

As Tokyo grows anxious over Pyongyang’s hostility, its Ministry of Defense ordered its military Sunday to shoot down any North Korean missile heading toward the country. Yesterday, Japan’s Defense Ministry deployed surface-to-air Patriot Advanced Capability-3, or PAC-3, missiles on its grounds in central Tokyo and in two bases in Camp Asaka in Tokyo suburbs and Camp Narashino in Chiba Prepecture to intercept any ballistic missiles headed toward Japan.

The Patriot missiles will also be set up on Okinawa’s Naha Air Base and Chinen Sub Base starting from late April, reported the Asahi Shimbun. They were originally slated to be deployed near the end of 2014.

Tokyo indicated that the Patriot missiles were the second line of defense as Aegis radar and interceptor missile equipped warships earlier had been deployed to shield Japan.

Pyongyang was critical of Tokyo as the Japanese cabinet on Friday decided to extend punitive measures, such as port call bans, for two more years in response to the North Korea’s third nuclear test in February.

“Our military sees that North Korea can launch missiles immediately even tomorrow, and we are concentrating on watching their movement, taking advantage of the Korea-U.S. reconnaissance and surveillance,” Defense Ministry spokesman Kim Min-seok said.

Military sources indicate that Pyongyang may also simultaneously launch Scud and Rodong ballistic missiles, with ranges less than 1,000 kilometers, along with the Musudan.