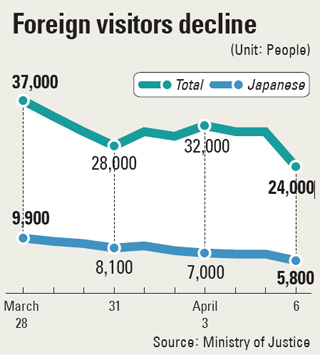 A 40-year-old Thai man, Isara Ordeedochest, and his wife are fans of Hallyu, or the Korean Wave.

They planned to visit South Korea a long time ago and finally decided to come to Seoul this month.

But when they told about their vacation plan to their friends, everyone tried to dissuade the couple from visiting Korea.

Since March, Kim Jong-un, the Pyongyang leader, has continuously threatened military attacks against the South and Washington.

The couple called their hotel in Seoul, checking to see if the city is in danger, even though the hotel management had explained to them that the city is safe and operations are normal.

“I hope we can go back to our country safely,” Ordeedochest told the JoongAng Ilbo at the Incheon International Airport. “We hadn’t had a vacation for a long time so we didn’t want to cancel our trip. I know that many Asian cities, including Seoul, are within the North’s missile range. We only are going to stay for four days, but we still worry about the current situation between the two countries.”

The foot traffic in Myeong-dong, central Seoul, a popular tourist area for foreigners, is relatively lighter than it used to be. Many Koreans out for lunch were seen on the streets, but fewer foreigners could be seen.

“We generally see about an average of 300 foreign customers per day, but we have only been seeing about 100 recently,” said Kang Dong-ee, 30, a worker at a cosmetics shop on Jungang-ro, the main drag stretching 300 meters (985 feet) from Myeong-dong Station to Myeongdong Theater.

“Almost every customer has asked me whether a war could break out between the South and the North.”

Hotels near the region are also having problems attracting guests.

“Most of our incoming calls are asking if the city is safe or not instead of making a reservation,” an official at the Lotte Hotel in Sogong-dong, central Seoul, told the JoongAng Ilbo.

The hotel is popular among the Japanese as it is located close to popular tourist sites, but the year-on-year booking rate for the hotel has been down 30 percent, according to the Lotte Hotel.

“Since the exchange rate of the yen weakened in October last year the number of Japanese visitors has decreased a bit, but the recent military threats from the North have made the situation even worse,” an employee of the hotel said.

Many hotels in other areas are having similar problems.

Foreign guests at the Millennium Hilton Hotel have decreased by 15 to 20 percent compared to last April.

“We judge that the number of visitors to the hotel will decrease by about 20 percent even in the upcoming peak season between May and June,” an official at the Millennium Hilton said.

“Many group tourists make reservations to visit in April, but the number has decreased by about 30 percent,” Lee, an official of a travel agency complained. He said that a group of 35 Chinese tourists canceled its reservation last weekend.

The situation is similar at Baengnyeong Island, the northernmost area in the Yellow Sea.

The Incheon City Government said the operator of the 2,071 ton “Harmony Flower,” which travels between Incheon and the island since July last year, said the company is considering stopping the ship unless the city government provides a solution.

The ferry, which can accommodate up to 564 passengers, has been sailing with only about 100 passengers each run since the North’s military threats were intensified in March.

The company said a total of 4,878 passengers have canceled their reservations, and it is currently not even able to earn its 24 million won ($21,000) daily fuel price.

“The ferry operators are considering submitting a petition that requests the Incheon government provide support,” a spokesman for the ferry company said.

There are two more ferries carrying tourists between Incheon and Baengnyeong - the Democracy and the Princess.

“We estimate that 2,425 of a total of 6,289 ferry ticket reservations have been canceled over a month due to the North’s military threat,” a spokesman of the Incheon city government said.