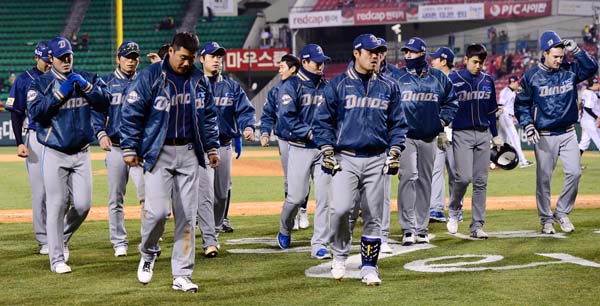 NC Dinos players walk off the field after a 9-5 loss to the LG Twins on Tuesday at Jamsil Stadium, southern Seoul. The Dinos have lost six straight games to open the season, which is their first in the Korea Baseball Organization. [NEWSIS]

It looks like the Korea Baseball Organization has downsized to a seven-team league.

The KBO started the season hoping that the expansion to its 9-team league will add dynamics and fun to the country’s most popular sport. But the two worst teams are yet to win more than 10 days into the season, which is causing concern in the growing league.

The newest team, the NC Dinos, lost their first six games, while the 2012 last-place Hanwha Eagles are winless in their first eight campaigns. The Eagles lost to the defending champion Samsung Lions, 8-2, on Tuesday while the Dinos lost to the LG Twins, 9-5, on the same day.

The Eagles were only four games shy of tying the league record for the longest opening losing streak. The Lotte Giants lost 12 straight games at the beginning of the 2003 season, in which the Giants’ final record was 39-91.

The Daejeon-based franchise, which finished last in three of the past four years, brought in legendary manager Kim Euong-yong before the season, hoping to turn things around, but he has yet to fix the team’s chronic holes, particularly pitching.

Denny Bautista (0-1, 4.76 ERA) and Dana Eveland (0-1, 5.11 ERA), two new foreign pitchers for the Eagles, are pitching solidly, but the vacuum left by the former ace Ryu Hyun-jin, now pitching for the Los Angeles Dodgers, is substantial.

Eagles pitchers have allowed as many as 61 runs (58 of them earned) over 69 and two-thirds innings in the first eight games. Hanwha’s team ERA is 7.49, more than twice that of the Lotte Giants, who are leading the league in the category at 3.38. The Dinos have the second-worst team ERA at 5.02.

The Dinos, which were created as the ninth KBO team in 2011 and spent a preparatory season in the Futures League last year, are struggling more with hitting than pitching. Its team batting average during the six games was .232, the second lowest to the SK Wyverns’ .229. The Dinos have only scored 14 runs, 49 runs less than the league-leading Kia Tigers.

On the other hand, the Dinos are the league-leader in errors, with 12 so far.

Some said the two teams’ winless streaks would be snapped only when they play against each other. The first game between the two teams will be held Tuesday in Daejeon.

The KBO officials are worried that the large gap between the two worst teams and the rest is leading to smaller ticket sales. According to a KBO tally, 353,184 people visited the nine stadiums across the country during the first 32 games of the season that had been held until Tuesday, which is down 15 percent from last year’s total of 413,924.

Baseball observers say it’s unlikely the situation will get better soon for the two teams.

Kim, the winningest manager in KBO history, summoned an emergency coaching staff meeting last Thursday after the Eagles lost their first four games. He had a similar sense of urgency with the Lions in 2004, when the Daegu team experienced a 10-game losing streak early in the season.

The Lions improved later to finish as the league runner-up that season. The Eagles shows no sign of accomplishing the same feat.

Dinos manager Kim Kyung-moon won 512 games as a KBO manager, second only to Kim Euong-yong, who won 1,476 games. Kim Kyung-moon said that he is not frustrated with the Dinos’ early season losses. “Experience will make them better,” he said.