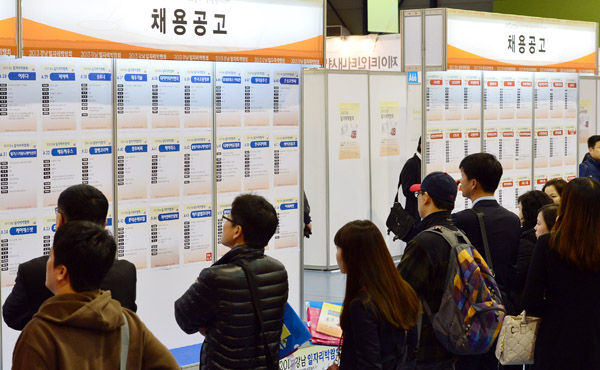 Job seekers look at a hiring board during a fair Tuesday at Setec center in Gangnam, southern Seoul. Economic indicators remains gloomy, including employment numbers. [NEWSIS]

The Korean economy is sailing through choppy winter waters as a low growth trend continues amid rising geopolitical risks in the Korean Peninsula, according to the latest analysis of the domestic economy.

Yesterday, the Ministry of Strategy and Finance released a report showing that although consumer prices have remained stable, the economy has struggled with low growth due to lingering concerns over financial insecurity in the United States, slowing recovery in Europe and risks related to North Korea. Domestic spending and investment have been sluggish lately, dragging down the economy further.

Citing Bank of Korea data, the finance ministry pointed out that overall private spending in 2012 increased 1.7 percent compared to the previous year. In 2011, the year-on-year growth rate in private spending was 2.4 percent. Officials noted that the rate of spending growth dropped because of the lower number of newly employed and growing household debt.

“There hardly seems any factor for now that can boost the Korean economy,” said Yang Jun-sok, an economy professor at Catholic University of Korea. “There’s no high expectation of spending because household debt still remains high, investment outlook seems dim and export conditions will most likely remain tough as developed countries experience slowdowns in their economies.”

Yang said the low growth trend will continue for one or two years.

“What will be important is to have large companies with money invest more and expand government expenditure,” said Yang.

As for now, the Ministry of Strategy and Finance considers the impact of Pyongyang’s war threats on the real economy as limited. But it isn’t ruling out the possibility that exports and foreign investment could be negatively affected if the situation persists for an extended period. Yesterday, the finance ministry released a report saying, “There hasn’t been much difficulty yet in exporting goods and attracting foreign direct investment [FDI]. However, if risks involving North Korean provocation remain for the longer term, there is a possibility that there could be negative impacts on the real economy.”

In fact, there has been a recent exodus of foreign investors, according to the ministry, which has stemmed from variety of reasons, including geopolitical risks, the worsening euro zone situation and the weak Japanese yen.

This year, foreign investors had sold a net 4.2 trillion won of Korean shares as of Tuesday, which accounts for 1 percent of total foreign ownership of local shares.

Foreign analysts forecast that the North’s threats could impact the overall stock and foreign exchange (FX) markets, as well as FDI volume.

According to a report released by Citi Research, if tension on the Korean peninsula continues to rise, the local FX market and FDI would suffer a bit hit. Since 1996, the Korean won weakened after 11 of 17 North Korean provocations.

“A weak Korean won is definitely positive for Korean exporters amid heightened concern over the weak Japanese yen,” the report said. “But it could also increase inflationary pressure via import price increases in the later part of this year.”

Citi also predicted that FDI in Korea could tumble under an ongoing political crisis. The country’s FDI contracted by 20 percent year-on-year in 2010 after the second nuclear test by North Korea and the sinking of Cheonan.

The central bank will hold a monetary policy committee meeting today and announce its own economic growth forecast and whether it lower the benchmark rate.

“The combination of weak activity and low inflation keeps the pressure on the BOK to cut policy rates, and we now expect it to cut rates by 25 basis points,” Standard Chartered stated last week. “We cannot rule out the possibility that the BOK will hold the rate at 2.75 percent to prove its independence .?.?. But we think that fundamentals will outweigh the issue of independence. It will be difficult for the BOK to keep the policy rate unchanged while revising down its official GDP forecasts [in April following January].”