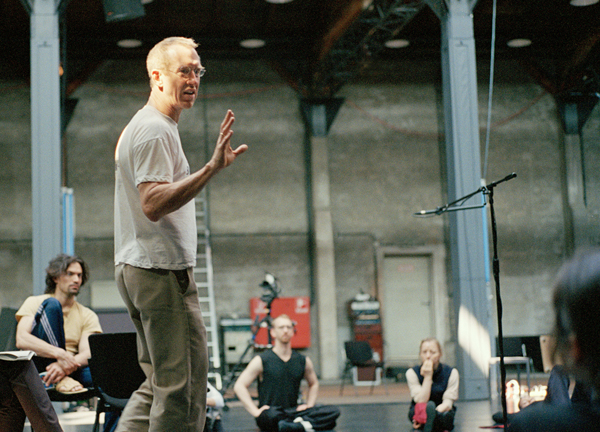 He’s been dubbed one of the world’s foremost choreographers. Having made a successful transition from ballet dancer to choreographer, dance mastermind William Forsythe has done a lot in his 40-odd years in the industry.

Aside from serving as a resident choreographer at the Stuttgart Ballet (1976) and producing contemporary work for ballet companies in Munich, London, Berlin, Paris and New York, he founded The Forsythe Company in Germany in 2005.

Leaping between classical and modern, the man often cited as the founder of neoclassical dance has worked tirelessly to stretch the limits of human movement.

His ideas do seem to extend into all facets of art. On his long list of accomplishments, Forsythe can include installation works for art museums as well as assisting some of the world’s leading architects.

Given his long list of accolades, it is surprising that he’s never had the opportunity to dazzle the dance crowd in Seoul. But that’s about to change.

In an ambitious move, The Forsythe Company’s headman has landed in Seoul to present one of his most-loved works, “Heterotopia,” at the Seongnam Arts Center in Gyeonggi.

As one of Forsythe’s most complex shows, it occupies two rooms - a fact that left some wondering if Seongnam Arts Center was a suitable venue. Stemming from the ideas of Michel Foucault, it expresses contrasting places and spaces through human movements.

Ahead of the opening, Forsythe spoke to reporters about his passions, problems with ballet institutions and his show, which was unveiled yesterday.

“Heterotopia” will be performed today, tomorrow and Monday at 8 p.m., and on Saturday and Sunday at 5 p.m. at the Opera House of the Seongnam Arts Center. 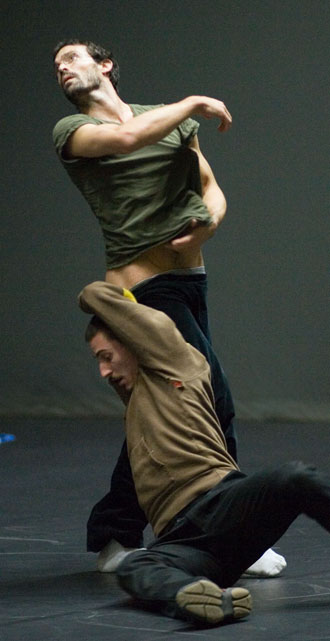 The Foucault-inspired work “Heterotopia” by William Forsythe premiered in Zurich in 2006. Provided by Seongnam Arts Center

Q. “Heterotopia” has landed in Korea. How do you feel about the show?

A. I’m excited to be here. I’m very happy to be a part of such a prestigious festival with many interesting artists - that’s first and foremost important.

“Heterotopia” is a work which is hard to see. But it’s easy to hear. So it is slightly deceptive. In one room, what looks like a dance is actually a concert or just like a play.

And this concert is actually the music for a different work that takes place in another room.

The dancers, when they are not “dancing” per se, they are conducting like an orchestra. But sometimes the conductors follow the musicians.

So there are very many overlapping structures of responsibility and initiation.

How do you want the public to view the show?

I hope that the public will take the initiative to change rooms because if you stay in one room you don’t understand anything. It’s necessary to move in order to understand.

There are many kinds of musical structures that the performers are focused on.

Polyphony, for one, they are primarily focused on orchestra music. Their primary goal is musical and not really theatrical.

“Heterotopia” focuses on foreign or unfamiliar things. What props did you use to convey this message?

The music is more like an opera, and it’s conducted in fictive languages that don’t exist but sound like existing languages. In some cases, they sound like animals.

The idea for the structure came about because a graveyard is a heterotopia theoretically. There is a word play in which a place an orchestra plays is an “orchestergraben” [in German]which means a grave also.

And so we decided to create an orchestra grave or cemetery. That’s where the musical idea came from, so they are playing for another world.

I grew up in a musical family. My grandfather was a concert violinist, a child prodigy. He had his first premiere in Vienna when he was 12 at the opera. He taught me violin but explained that I wouldn’t be a great violin player and said that I’d be a great conductor. I went on to learn the bassoon and then the flute. I played three instruments then sang in the chorus.

My father was a piano player also at home. It was a lot of music at home.

But at the same time, I had a normal American ’50s-’60s upbringing. A lot of rock and roll. Motown is very important funk, so I was sort of between two worlds. I feel very comfortable, in other words. I can hear the funk in Bach.

In dance, if there’s too much music, it becomes aerobics, whereas with none, it’s boring. What do you think about the proportion of music in ballet?

Musicality does not reside exclusively within the domain of professional music. Dancers are highly musical individuals - a lot of them. To ascribe hierarchy from history is a mistake. It should not be music first, dance second.

What do you think about the role of music in contemporary ballet and in “Heterotopia”?

After the model of [George] Balanchine in ballet, it was difficult to take on the project of interpreting music.

So I have pretty much abandoned that project, not entirely, but moved on to finding structures that allow the inherent musicality of dancers to be the guiding musical structure of the piece. So the music that you hear in the piece doesn’t affect them.

One time they do a slight counterpoint, some percussions, but other than that, it’s not important.

You draw a lot on architecture in your work. During “In The Middle” you even hear machine noise. Can you tell us about the relationship between dance and architecture?

Actually in “In the Middle,” all the sounds I made [come] from the voice of Mr. Thom Willems, the composer. It sounds like machinery, but it’s not - just a digitally produced human voice. 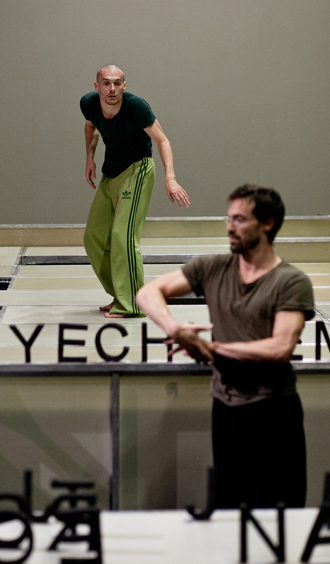 Dancers of The Forsythe Company rehearse.

“In The Middle” was made for a very strong classical environment in the Paris ballet made in 1987. It is an extension of the technique.

I was actually concerned with the classical form of theme and variations, and in a sense, it’s mathematical, and if it appears architectural that’s good, but I’m not sure that my intentions were that way.

I have worked in the field of architecture. I’ve worked with Daniel Libeskind on projects. Now I’m working with Diller and Scofidio, who seem to enjoy commentary that I can make in conversation.

I think because of my musical upbringing when I listen to music, I think architecturally.

You went from classical ballet to contemporary and said you wanted to do away with old methods. Why is there a need to change classical forms?

Language is not new for me. It’s almost 40 years that I’ve used language in pieces.

I did not turn away from classical ballet. Three weeks ago I was in Russia; I was at the Mariinsky. [I was at the] Paris Opera in December. I didn’t stop anything.

With my company, though, I have a different instrument. I have dancers who have studied ballet, but we are not interested right now in the project of classical ballet.

What do you think about classical ballet companies today?

Right now, I think the problem lies in the institutions of classical ballet, not the dancers. How the companies conduct themselves is questionable for me.

I like ballet very much, but I think that within the world of ballet, which is different from my world, I think they’re having a kind of crisis.

I don’t feel that they’re willing to accept that the future of ballet does not look like the past. There is the tendency to insist.

Can you describe in detail what this crisis is?

For example, look at Mariinsky. Their director is a conductor, but he does not understand how ballet works. He thinks it’s OK to rehearse 11 hours a day.

He thinks it’s OK to give 360 performances a year.

If there’s going to be any change, there’s got to be desire for change. Now it’s not 1875. So you can’t make a very authentic classical ballet.

You said you drew inspiration from Michel Foucault’s ideas. How does his influence come up in the performance?

Philosophy can be a very useful tool, but it doesn’t have to demand or function as an imperative. So Foucault was useful to start something, but I don’t know if he was useful to finish it. I’ve used Foucault on a number of occasions, and I find that he is very suggestive in terms of procedures.

Some say that you have reinterpreted ballet. What do you focus on?

Apparently you give a lot of freedom to your dancers. How much freedom should a dancer and a choreographer each be ascribed?

I like working with artists who are autonomous, so the work I have with my company is very dialogic. So I make proposals and they give me answers and then we discuss. The conversations I have are very in-depth.

What message were you trying to send by creating “Heterotopia”?

I don’t give messages. I try not to, I hope not.

Then why did you create the piece?

I have no idea why I made the piece. I’m not a scientist. I’m not trying to solve a scientific problem. I’m curious about what could possibly function in the environment of performance. I’m out there testing in a different way. I’m more like a medium, like a shaman.

“Heterotopia” is described as reinterpreting the space of the theater. So it’s quite a site-specific project, isn’t it?

“Heterotopia” is very difficult to play in theaters. We were very surprised.

This was a very big production, and it’s very complicated to bring over. It was the festival that requested this piece very, very, specifically. We said we had simpler pieces too, but they said no, they wanted this one. So that gives you an idea of their scope and ambition. I’m very happy to be in this context.

The piece usually does not play in theaters; it plays in rooms like a warehouse or something. So I’m curious to see how it’ll come out here.

* With The Forsythe Company: