McIlroy ripe for Augusta, a shot at his third major

McIlroy ripe for Augusta, a shot at his third major 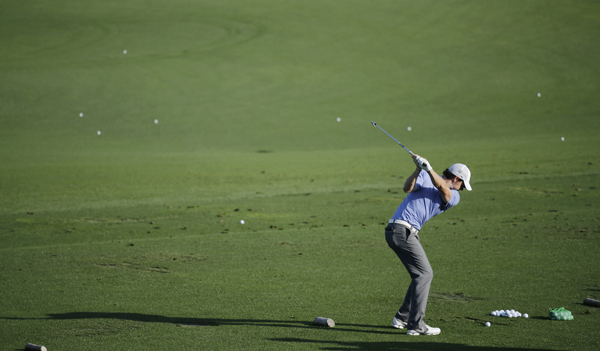 Rory McIlroy, of Northern Ireland, hits balls on the driving range during a practice round for the Masters golf tournament Tuesday in Augusta, Georgia. [AP/NEWSIS]

AUGUSTA, Georgia - Three months into the season, Rory McIlroy feels as if it’s already been a long year.

The splashy announcement of his Nike deal, and the commercial with Tiger Woods that raised hopes of a big rivalry. The missed cut in Abu Dhabi. The first-round exit from the Match Play Championship. Quitting halfway through the second round of the Honda Classic. The loss of his No. 1 ranking.

And now, McIlroy is ready to get started.

“I’ve always said the main golf season is from the start of April to the end of August, so that’s when I want to play my best golf,” McIlroy said Tuesday.

It all starts with the Masters.

McIlroy can’t simply dismiss the past three months and the endless questions about the state of his game and his new equipment. He at least brings some measure of form to the first major championship of the year. Desperate to find his game, he added the Texas Open at the last minute and in turned out “almost perfectly.” The 23-year-old from Northern Ireland didn’t think about his swing, only his score. He challenged in the final round and wound up the runner-up.

Whether he’s ready for Augusta National won’t be known until Thursday. But at least he knows it’s there.

“I’ve went through these patches before where I haven’t played so well and the game feels quite far away, and then something clicks and then all of a sudden, it’s back again,” McIlroy said. “I probably should have learned more from it from last summer when I was going through those struggles. .?.?. When I don’t play my best, it’s when I get into bad habits in my golf swing. Whenever my golf swing is where I want it to be, that’s when I produce results.

“And that’s what I’ve seen has started to happen over the past few weeks.”

The problem has been the swing, not the clubs he was swinging.

Even so, McIlroy conceded the adjustment took some time. Woods took nearly five years before working all the Nike clubs into his bag. McIlroy did it all at once, and when he played poorly the first two months of the year, it only added to the scrutiny.

“The way I was hitting the ball at the start of the year, I needed a short game just to get myself around the golf course,” McIlroy said. “Off the tee has been a big improvement. There was a little bit of an adjustment period getting the driver that really suited me. And once I got that, you gain confidence whenever you play rounds and you see yourself hitting good drives, hitting it in the fairway and setting yourself up with iron shots into the greens.”

McIlroy has plenty at stake this year.

He already has two legs of the career Grand Slam, having set the scoring record at the U.S. Open when he won at Congressional in 2011, and then lapping the field at Kiawah Island last summer to win the PGA Championship. A win this year would put him in exclusive company. Dating to 1960, Arnold Palmer, Jack Nicklaus, Tom Watson, Phil Mickelson and ?Woods are the only players to win majors in three straight seasons.

?But there is no denying the affection McIlroy has for the Masters, which he calls his favorite major. He remembers playing Augusta for the first, so inspired by the purity of the place that he was afraid to take a divot.

Just a month ago, he was happy to make the cut and make progress. Now his goals are back where they should be.

“Would anything less than a win be a disappointment this week? Yeah, it would be,” he said. “Every time you come here to Augusta, you’re wanting to win that green jacket, and every time that you don’t, it’s another chance missed. But if I’m sitting here on Sunday night and I’ve finished second or if I’ve given it a good run, you can’t be too disappointed because you’ve had a great tournament. But the ultimate goal is getting one of those jackets.”