Five conglomerates, half the pie

Five conglomerates, half the pie 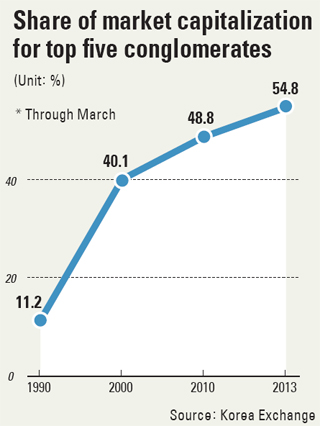 After falling slightly at the end of last year, the nation’s top five conglomerates combined to account for nearly 55 percent of total market capitalization on the Seoul bourse at the end of March.

Samsung topped the list at 335.1 trillion won, or 28.9 percent of the total. The leading automaker group’s market capitalization accounted for 11.7 percent at 135 trillion won. LG, SK and Lotte trailed with 6.3 percent, 5.8 percent and 2.2 percent, respectively.

Analysts say one of the biggest reasons for the rapid growth was the pro-conglomerate policies of the Lee Myung-bak administration to blunt the effects of the global economic crisis. The Lee government quickly moved to execute a stimulus package that helped the Korean economy become one of the fastest to recover.

In the process, the benchmark seven-day repo was dropped to a record low of 2 percent.

The abundant liquidity in circulation helped weaken the Korean won, which led to more competitive prices for Korean products overseas.

As a result, major conglomerates including Samsung Electronics, Hyundai Motor and its main affiliate Kia Motors were able to aggressively expand their global market share, and the domestic economy started to recover on the strength of exports.

Companies that mostly targeted the domestic market experienced modest growth, but their foothold on the stock market started to shrink.

The increased influence of such conglomerates has had a side effect, say market experts.

“As market capitalization of major conglomerates grows, the Kospi could easily be swayed by how these conglomerates perform, making the market more vulnerable to volatility,” said an analyst who requested anonymity. “The market should be fairly balanced to reduce possible risks.”

Some projects that influence these conglomerates could shrink as the Park Guen-hye administration focuses on fostering the domestic market and supporting small- and mid-size companies.