SK Telecom doubles down on LTE

SK Telecom doubles down on LTE 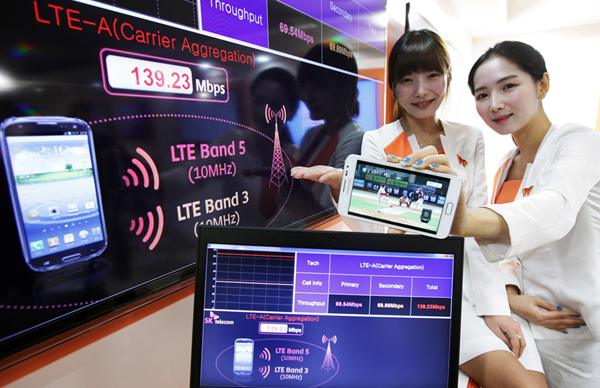 A smartphone runs the LTE-A system yesterday at SK Telecom’s Gundang office in Gyeonggi. The system will be available later this year. Provided by the company

SK Telecom yesterday unveiled an advanced wireless network that is twice as fast as the most up-to-date long-term evolution (LTE) network, along with a plan to implement it commercially sometime around September.

Dubbed LTE-A, the new network will offer a significant upgrade from the fourth-generation LTE and will be the first time that a wireless network exceeds the optic local area network (LAN) in data transmission speed. Optic LAN is widely used, although it is increasingly being replaced by Wi-Fi due to smartphones and tablet PCs.

When using the LTE-A, downloading an 800-megabyte video file takes 43 seconds, compared to 64 seconds for optic LAN, 85 seconds for existing LTE and seven minutes and 24 seconds for the old 3G network.

Core technology for the LTE-A is carrier aggregation (CA), which bundles two frequency bands to increase the bandwidth. Installing a multicarrier (MC) network is a prerequisite, SK Telecom says. MC automatically chooses one of several frequency bands based on data traffic at the user’s location.

The even faster mobile network is seen to further facilitate high-volume downloads of data, such as games and high-definition videos.

“LTE is expected to remain a key wireless network for some time,” said Kwon Hyuk-sang, head of network division of SK Telecom. “We won’t just stop short of introducing the LTE-A but will continue developing it into a smarter and faster network.”