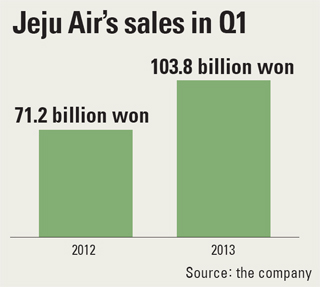 Jeju Air said yesterday preliminary results indicated the company collected more than 100 billion won ($88 million) in sales and served a million passengers in the first quarter of this year, both a record quarterly figure among Korea’s five low-cost carriers.

The first-quarter sales also surpassed by more than 10 billion won the previous record of 93.7 billion won in the third quarter of 2012, which contains a vacation season.

Jeju Air’s revenue mostly came from international flights, whose sales (68.8 billion won) were more than double those of domestic flights.

The company, controlled by Aekyung Group, said rising sales in Southeast Asia, especially Thailand and in the Philippines, played a major role in the Q1 performance.

But in terms of passenger capacity, Jeju Air served 654,000 customers on domestic flights and 407,000 on international flights.

In total, the budget airline served 1.06 million customers in the first quarter, up 31.6 percent from a year ago. The figure also sets a new company record, beating the 990,000 customers in the third quarter last year.

“There were some difficulties for our business regarding the weakening yen and North Korea tensions,” the company said. “But with our strategic plan that looks ahead two or three years, our investments seems to be paying off.”

Jeju Air, led by CEO Choi Kyu-nam, was one of the most aggressive low-cost carriers in working to raise its brand value. It brought four aircraft last year and expanded with international routes as to Guam, Qingdao in China, and Fukuoka and Nagoya in Japan.

The company plans to add its 13th aircraft next month, while starting an Incheon-Narita flight from July 4. Its 2012 goal is 480 billion won in revenues and 17 billion won in operating profits.