Turns out we don’t drink as much as we thought

Turns out we don’t drink as much as we thought 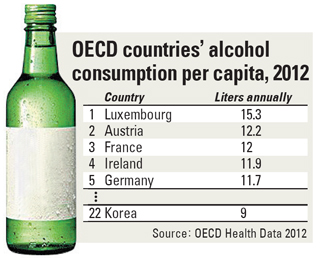 Contrary to reports by the World Health Organization suggesting that Koreans drink more than people in most other countries, domestic alcohol consumption has steadily declined in recent years.

According to the Korea Alcohol and Liquor Industry Association (Kalia) yesterday, per capita consumption by people 15 and older was 9.18 liters (2.43 gallons) in 2011. The figure is based on shipments of domestic and imported alcoholic beverages that year and is 30 percent less than the 14.8 liters per capita suggested by the WHO.

Koreans favored distilled liquor and beer, which accounted for 88.1 percent of the market, according to Kalia. Per capita consumption of distilled liquor, such as soju and whiskey, was 6.06 liters, followed by beer at 1.99 liters, and wine and other beverages at 1.09 liters.

Nevertheless, consumption of distilled liquor has decreased significantly and beer slightly since 2008. At the same time, more people have been drinking makgeolli, traditional folk wine and other alcoholic beverages.

Kalia’s report showed that Koreans’ alcohol consumption is comparatively low in relation to other countries, due in part to an increasing interest in?health and the decline of cultural mores that required people to drink.

“Currently, several government measures to resolve various alcohol-related problems have come up, such as raising the tax on alcohol, imposing fees to underwrite public education concerning health risks, and restricting sales and advertisements of liquor,” said the report.

“However, looking at the gradual alcohol consumption downturn, it would be more desirable for the government, liquor industry and civic organizations to cooperate in promoting healthy drinking and preventing excessive drinking, drinking by youth and pregnant women, and drunken driving.”