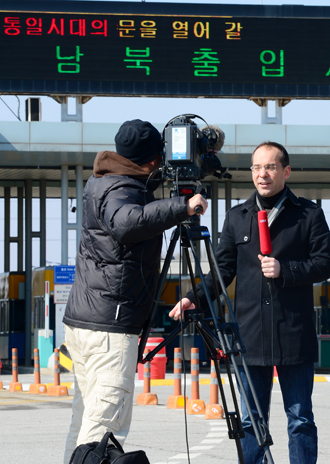 A foreign news correspondent reports at the Inter-Korean Transit Office in Paju, Gyeonggi, as Pyongyang boycotts the Kaesong Industrial Complex for the eighth consecutive day yesterday, amid international trepidation regarding an impending missile launch. [NEWSIS]

But despite fears of North launching missiles yesterday, as reported by Japanese media, and Pyongyang warning all foreigners in Seoul to plan for evacuation as their safety could not be insured, the South remained calm to the point of apathy.

Koreans and foreign residents in Korea made no preparations for possible war, such as stocking up on ramen or water, nor did embassies or foreign enterprises evacuate as advised by the North.

The JoongAng Ilbo met with ABC News’ veteran foreign correspondent Bob Woodruff yesterday, who was speedily dispatched to Seoul last Friday as media from around the world have flocked to Seoul over the past weeks.

Woodruff, who was injured by an explosion in Iraq in 2006 and since 2005 has visited North Korea four times, said that the North Korean leader Kim Jong-un is “young and unpredictable.”

Woodruff pointed out that if the United States’ northern neighbor Canada made such provocations like the North, “the U.S. would have been frantic.”

He added, “The Korean people are frustrated with having lived like this for 60 years.” He said that the “U.S. does not understand” how Korean can remain so calm.

He said that North Korea is “frustrated and desperate” and that there was no telling what the North would do, though he did not think it would lead to war.

In a survey conducted of 1,000 South Korean adults over 19 at a North Korea forum on March 24, 51.3 percent replied that “there was no chance of war.”

Following the sinking of the Cheonan and the Yeonpyeong shelling, Koreans and foreigners residing in Korea know what to expect.

Lee Yong-gang, 29, a Chinese man who has resided in Korea for five years, stated, “It does not seem like the current situation will unfold into a war.”

But he said his friends in China contact him asking, “Are you all right? Aren’t you nervous living in Korea?”

Some Chinese universities have even given their students studying abroad in Korea evacuation instructions, he said.

CNN correspondent Jim Clancy, who has been dispatched in Korea since March 25, told the JoongAng Ilbo that those outside Korea “cannot understand North Korea’s heated rhetoric” but in reality it is only “empty threats.”

Seoul National University’s Office of International Affairs said it received over 10 calls from parents of its international students recently and a faculty member said, “The Mongolian Embassy called to ask if there was a danger of war in Korea and if it was safe, and we replied that the government nor the school has officially given any instructions and that Korean society is not very agitated.” Yonsei University likewise over the week saw some 70 international students asking questions regarding safety following the North’s provocations.

Lim Jeong-sub, professor of journalism at Sogang University, said, “During the 2010 Yeonpyeong shelling, international media sent veteran correspondents and supposed war and Asia experts, but there was a lot of misinformation. As international media misinforms or exaggerates its reports, it will seem like fact to those who do not know about the situation in Korea.”