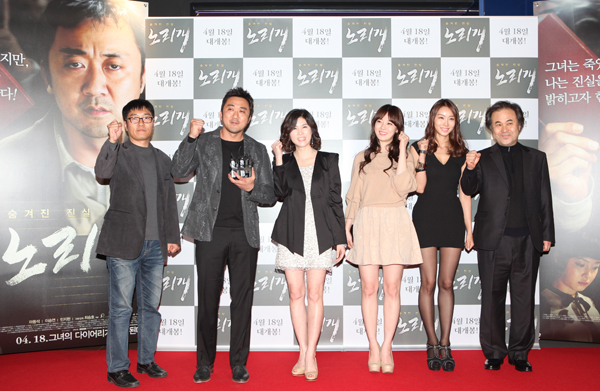 Way ahead of its release on Thursday, the Korean thriller “Norigae” had tongues wagging around the nation.

The film, which is part legal drama, part thriller, is based on the case of an actress who killed herself after a life ridden with coerced sex.

And although the film comes with a disclaimer that it’s “not a retelling of real events,” many were already thinking back to 2009 when relatively unknown actress Jang Ja-yeon killed herself, leaving behind a list of some 31 media executives and businessmen she was apparently forced to sleep with.

Although director Choi Seung-ho insisted at a press conference on Tuesday that his movie was a work of fiction, he did not deny that female entertainers were often presented with such offers in the industry.

On the surface, the similarities between the fictional character and the late public figure are enough for viewers to transport themselves into Jang’s shoes to find out what really happened.

The film begins after actress Jung Jee-hee (Min Ji-hyun) meets her demise. There are flashbacks intermittently to show what tipped Jung over the edge.

Even though the film focuses on women as a commodity in the entertainment industry, there aren’t as many sex scenes as expected. But the ones that are included are certainly not for the fainthearted. 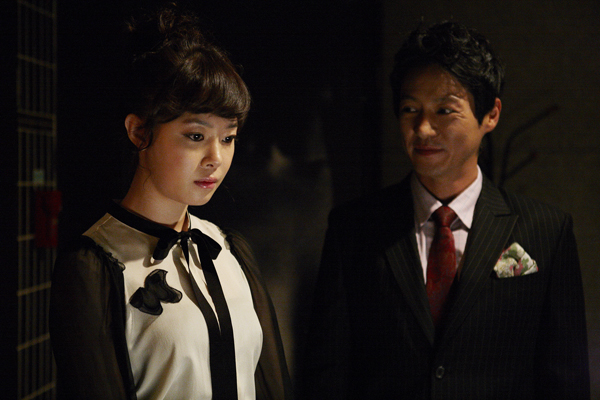 In the film, Min plays the role of unknown actress Jung Jee-hee, who is forced to sleep with powerful men by her agent.

Aside from the graphic scenes, most of the film depicts arduous hearings, the plight of the persistent reporter and other scenes that might be unexpected for theatergoers expecting a more conventional film about a deceased actress and seedy men in power.

“I wanted to bring reality into the situation,” Choi said while discussing the heavy emphasis on courtroom scenes. Doing his bit to eliminate corruption in the industry, Choi attempted to show the enduring pain felt by those who loved the victim as well as the frustrating court proceedings that rarely work in favor of the deceased.

As well as having a director who wanted to “alert the public about unfair loopholes in law,” there were actors passionate about playing characters that in turn were determined to solve the case.

Journalist Lee Jang-ho (Ma Dong-suk) risks all that he has to find the dead actress’ diary despite opposition from foes, friends-turned-foes and family, too. There is also a female prosecutor named Kim Mi-hyun (Lee Seung-yeon) who puts her heart and soul into the case despite opposing pressure from those who should be on her side.

The actors said that they did in-depth research to get the story right.

“I always try to do justice to people who are in that profession. I watched a lot of movies about journalists and also spoke to friends who are journalists,” Ma explained.

Lee said that she also took the role as a privilege and honor.

“As a 30-something actress given such a character, I decided to give it my all. The director actually majored in law, so he took me to the Seocho District Prosecutors’ Office where I talked with female prosecutors to find out about life and work.”

Perhaps the most challenging role in the film was that of the victim, played by Min. And while some actresses may shirk away from such a role, Min said that she was up for the challenge. “Filming those scenes - it wasn’t as terrible as it is to watch,” she said.