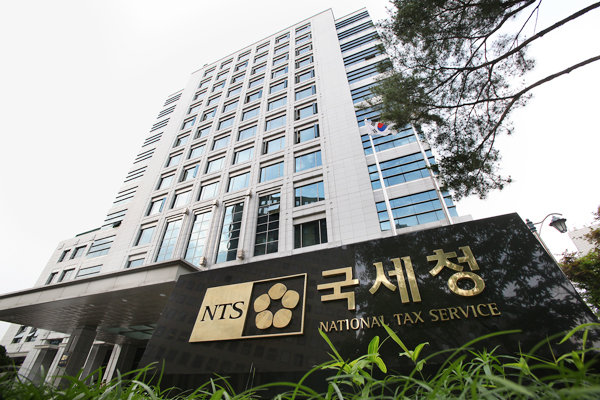 The Korean business community is in panic mode ahead of audits by the National Tax Service (NTS), which plans to examine 1,170 companies whose annual revenue exceeds 50 billion won ($44.2 million). In addition to auditing 240 more companies than last year, the NTS will spend six to eight months doing it instead of the usual three to four.

“We plan on thoroughly looking into the details of these companies, whether they have offered unfair business to affiliates, managed their stakeholdings in other people’s accounts or established bogus affiliates [whose sole purpose is dodging tax],” said an NTS official.

The move is believed to be aimed at helping to secure the government’s goal of 135 trillion won budget earmarked for welfare programs.

The NTS yesterday stated its intention to target the so-called underground economy, including irregularities perpetrated by major conglomerates with annual revenue of 50 billion won of more; tax dodging by high-income professions such as physicians, accountants and lawyers; and offshore tax evaders.

As part of the ramped up investigation, it has increased the number of auditors to 289 from last year’s 192.

On Wednesday, finance minister and deputy prime minister of economy, Hyun Oh-seok, told reporters he was positive that the relentless tax investigation of the underground economy and reduced tax exemptions will secure the 135 trillion won in welfare funding needed over the next five years. “Society is heading toward accepting taxation, which is certainly justified,” Hyundai said.

The tax office has already begun audits of some companies, including the nation’s leading tobacco company KT&G. Also, the NTS recently took the unusual step of sending some 30 investigators to begin the audit of Lotte Hotel; normally two seven-member teams are sent. 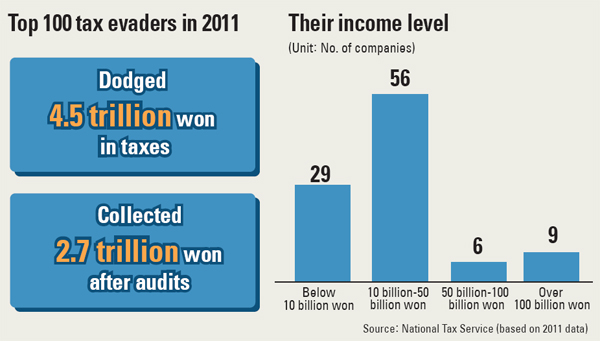 Companies that have been notified their audits will take six to nine months are GM Korea, GS Caltex and LG Display.

“It’s intense,” said a GM Korea official.” Even though this is a regular audit from the tax office, we have been notified that it will last for six months.”

GM Korea, which reported an operating loss last year, is being investigated for any irregularities in sending parts to its headquarters in the United States or other production plants overseas.

In 2008, the automaker was charged 30 billion won by the tax office after a three-month investigation.

The business community is not too happy about the stepped up audits, complaining they will have negative influence.

“If the tax audits last for a half-year and investigate every detail, executives and employees will likely withdraw, and managing the company will become difficult,” said a conglomerate official

“And we have to deal with the [public] perception that there is some huge problem.”

A business lobby official said NTS tax audits at such a level are like dropping bombs.

Aside from burden of the extended time period for the audits, members of the business community say they are under unprecedented pressure due to the intensity and depth of the investigations.

“Previously, we categorized some of the employees’ golf expenses as welfare cost, but the auditors fined us saying it was not applied to all employees,” said a company executive. “In the past, we would have gotten off with a warning.”

Some companies claimed auditors’ demands for data are excessive, and they seem to be under pressure to produce results.

In some cases, “Investigators arbitrarily interpret tax regulations on issues that could be controversial,” claimed an accounting official at a company being audited.

Another CEO said agents are under immense pressure to collect taxes because they are evaluated based on their performance.

“Every company has dirt,” said an official in the business community, who requested anonymity. “Even a person who runs a mom-and-pop store will be under stress [when audited].”

The NTS said the estimated 430,000 companies whose annual revenue is below 10 billion won will not be included in the regular auditing.

However, companies with revenue between 10 billion and 50 billion won worry they could be drawn in as well.

A businessman who supplies dental products received an audit notice from the tax agency last week, although the company’s revenue shrank by 100 million won last year.

It will be the first audit for the company since it was established 10 years ago. “I didn’t think they would investigate such small operations,” said the company founder. “Especially if the investigation expands to our clients [dentists], it might hurt our business.”

Hong Ki-yong, chairman of the Korea Taxpayers Association, said it is more important to change the system of collecting tax rather than increasing the intensity of audits.