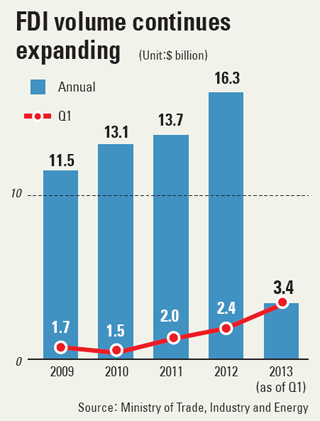 Despite ongoing tension on the Korean Peninsula, the volume of inbound foreign direct investments (FDI) reported to the government hasn’t been affected.

According to the Ministry of Trade, Industry and Energy yesterday, inbound FDI volume reported was $3.4 billion in the first quarter, up 45 percent from the same period last year.

However, $1.4 billion actually arrived in the country, down 23 percent year-on-year.

“Including geopolitical risks, there have been numerous factors that could contract the FDI volume this year, but the Q1 record is pretty good,” said Jeon Yoon-jong, director at the Industry Ministry. “The current North risks have had a limited impact on FDI. Large-scale investments in the real estate market are still being made by foreigners, and M&A investments are also on a steady growth.”

Foreign companies continue to buy properties in Gyeonggi, and they participate in development projects to create commercial districts in suburban areas of Seoul, the ministry said.

However, Citi Research said in a report Tuesday that the North’s threats could affect FDI volume in Korea if they continue for a longer period.

Another noticeable aspect in the Q1 FDI trend is that brownfield investment, referring to mergers and acquisitions, skyrocketed by 284 percent to $1.3 billion. Greenfield investments also expanded about 6 percent.

Although the global FDI volume is expected to decline this year due to the continuing slowdown, the Industry Ministry forecasts that foreign investment in M&As will keep growing, since the United States, Japan and European Union nations are taking quantitative easing measures to provide more liquidity in their markets.

By country, investments from the United States stood at $1.7 billion, up 299 percent year-on-year. On the other hand, investments by Japan, EU nations and China fell about 30 percent over the same period.

“It is also notable that investments in the service sector remarkably increased, while those in the manufacturing sector declined slightly,” the ministry said.

FDI in services jumped 170 percent, while declining in the manufacturing sector by 23 percent.