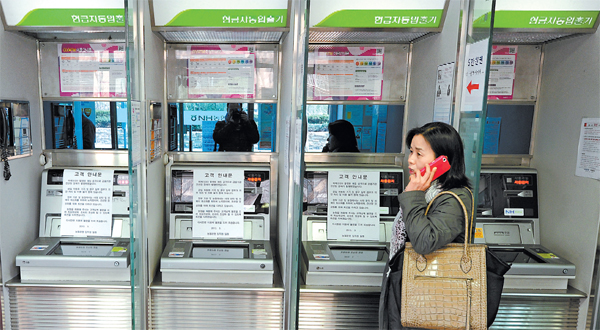 Only one out of five ATMs was working on March 20 at a Nonghyup branch in Seoul, after a series of attacks paralyzed the bank’s network the previous day.[NEWS1]

NH Nonghyup Bank’s computer systems were crippled once again on Wednesday, less than a month after a cyberattack rendered online services at the bank inoperable.

For over three hours from 6:20 p.m., customers could not use Nonghyup’s Internet banking service, according to the Financial Supervisory Service (FSS).

Computer systems at Nonghyup Life Insurance and Nonghyup Property & Casualty Insurance were also affected as they are hosted on the same server.

“At about 6:20 p.m. on Wednesday, the online services offered by Nonghyup Bank and its insurance firms became unavailable for three hours and 25 minutes due to an error in the Internet banking database server,” said Kim Soo-bong, deputy governor at the Financial Supervisory Service. “Operations resumed after the bank replaced the broken component [the GX adapter] of the database server. Until then, customers were not able to use online and mobile banking services or Internet insurance services.”

An investigation by the bank and FSS found that the problem was not caused by a cyberattack unlike the March 20 incident. A joint government investigation team found this week that North Korea was behind last month’s problems at Nonghyup, other banks and broadcasters.

“The temporary paralysis was due to an error in the database server,” said Jeon Tae-min, an official from the bank, about Wednesday’s incident. “There were no traces of outside intrusions.” 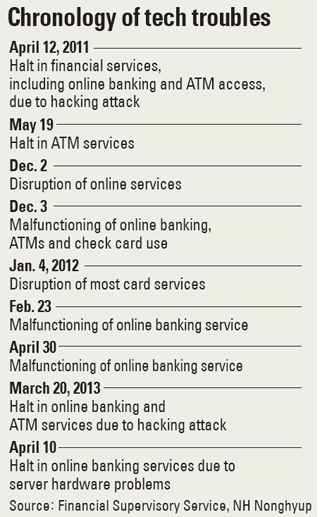 In light of the two incidents, criticism is growing against Nonghyup over its poor security systems.

Computer problems are not uncommon at the bank.

Nonghyup’s systems also shut down in April 2011 due to a cyberattack from North Korea. Online and mobile banking services and ATMs were rendered inoperable for several days, preventing access to even the most basic financial services such as withdrawals and deposits.

At the time, the incident was the worst computer system failure seen in the country’s financial sector.

It also recommended that financial institutions allocate 7 percent of their IT budgets to beefing up cybersecurity.

But despite the government policies, Nonghyup has apparently remained vulnerable to outside attacks.

Nonghyup is more vulnerable because it uses the same computer network across affiliates such as Hanaro Mart rather than isolating the bank’s network from others, the FSS said yesterday.