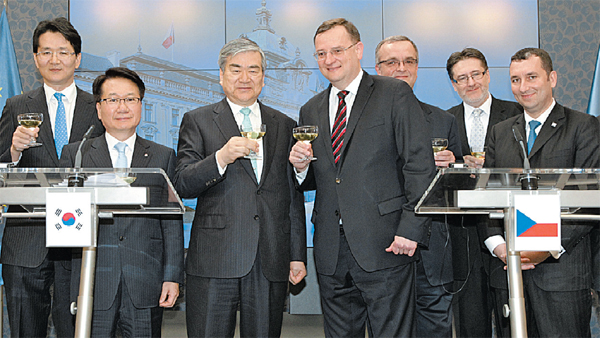 Korean Air Lines became the first local airline to hold a stake in a foreign carrier when it formalized a deal with Czech Airlines on Wednesday (local time) in Prague.

The nation’s flag carrier, which is controlled by Hanjin Group, said it officially acquired 44 percent of Czech Airline’s shares and became the second-largest shareholder of the airline after Czech Aeroholding, which has 51.7 percent.

“We have known Czech Airlines for a number of years, during which we have both been part of the SkyTeam alliance,” said Hanjin Group Chairman Cho Yang-ho, who was joined by Czech Republic Prime Minister Petr Necas at the signing ceremony. “Our successful codeshare collaboration only confirms that our decision to become a strategic partner of the Czech national carrier is the correct decision.”

KAL said that the deal will boost its brand value in the global market, while offering passengers a wider variety of European routes.

Passengers flying to European cities such as Berlin, Barcelona, Copenhagen, Milan, Brussels, Budapest and Warsaw can easily transfer through Prague’s airport, which offers connecting flights of two hours or less, according to KAL.

The airline plans to expand its network through the Prague airport by increasing codeshare flights and improving its connection schedules with Czech Airlines.