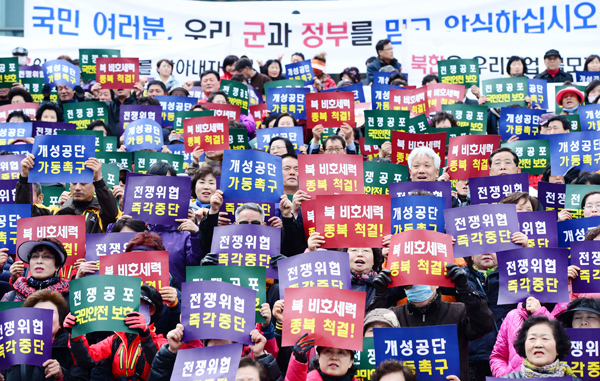 While ratcheting up scathing rhetoric against Seoul and Washington, North Korea was busy preparing for its upcoming national holiday, inviting a group of foreign dignitaries to the reclusive state.

Speculation was high in South Korea that the North would launch a medium-range missile on Wednesday, given the fact that Pyongyang publicly advised foreigners in the South to evacuate to avoid military conflict by that day.

Sources in Seoul said that the missiles are thought to be the intermediate-range Musudan, which reportedly has a range of up to 4,000 kilometers, or 2,485 miles, capable of reaching Guam, a Western Pacific territory of the United States.

However, regardless of its warlike words, Pyongyang remained silent about its alleged missile launch.

The regime appears to be rather busy preparing for its biggest national holidays - the anniversary of the April 15 birthday of founder Kim Il Sung, grandfather of leader Kim Jong-un.

The official Korean Central News Agency of the North reported Wednesday that a group of foreign dignitaries and businessmen have arrived in Pyongyang to attend the anniversary event scheduled for Monday. Some overseas North Koreans also showed up.

The Associated Press, which has a local branch in Pyongyang, reported yesterday that the capital was filled with a festive mood, while a series of dance parties and art performances are scheduled over the next few days to celebrate the birthday on Monday.

However, observers in Seoul point out Pyongyang has launched several missiles, mostly on its national holidays or special days for the United States, such as the Fourth of July in 2006 or Feb. 12 this year when President Barack Obama delivered his State of the Union address.

Some analysts even speculate the launch could come today, as U.S. Secretary of State John Kerry will visit South Korea, as part of his travels in Asia.

“So far, North Korea has always planned a surprise event that the international community never expected,” a senior Blue House official said. “There is a possibility that they could pick a day that no one expected, because they must be conscious of the warnings from Washington and Tokyo to shoot down any missiles from North Korea [if it threatens their security].”

Japan’s state-run Kyodo News reported yesterday that a North Korean missile launcher appears to be in a “raised position,” ready for launch at any time.

Quoting an unidentified Japanese Defense Ministry official, the state-run agency said a mobile launch pad in Wonsan city off the east coast in North Korea has been spotted in a firing position, based on imagery from a Japanese observation satellite.

However, the official also told Kyodo News that they didn’t rule out the possibility that it could be a disguised attempt to ratchet up tensions and draw attention from the outside world.

Military sources in Seoul also told reporters yesterday that Pyongyang appeared to repeatedly expose their missiles only to turn around and hide them, in an attempt to confuse observers.

“Previously, when a satellite passes over its territory, North Korea has hid their missiles as if they were fixing them,” the Blue House official added. “It also surprised the world by launching a bunch of missiles simultaneously, not just firing off one, during the early morning.”

In the midst of a tense situation, South Korea’s Unification Minister Ryoo Kihl-jae urged Pyongyang “to come to the table for talks” to resolve the suspended Kaesong Industrial Complex and stop its alleged plans for a missile test.

“The normalization of the Kaesong complex should be resolved through dialogue,” Ryoo told a press conference yesterday. “In order to discuss what the North Korean side wants, we urge the North Korean authorities to come to the negotiating table.”