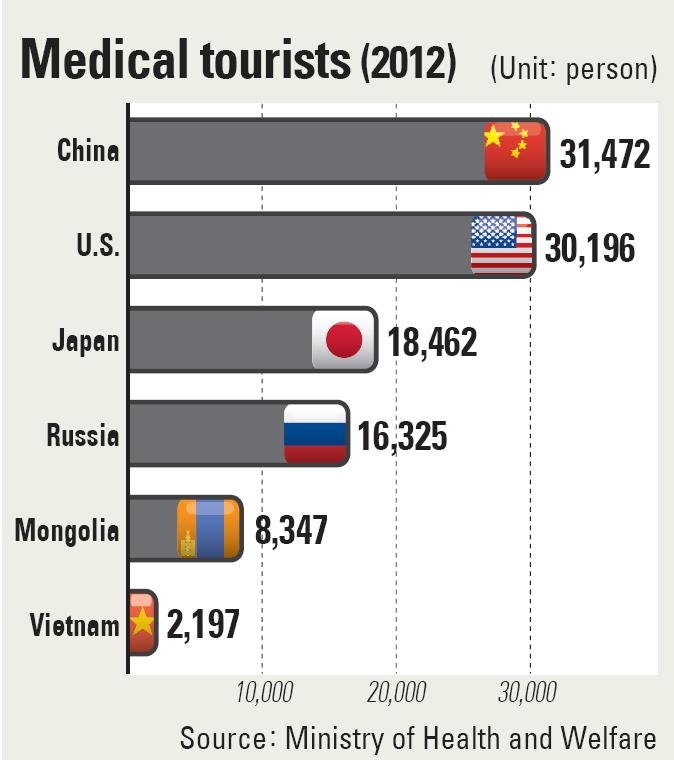 Chinese tourists have emerged as the largest group of visitors to come to Korea on medical tours, mostly for cosmetic surgery.

The Ministry of Health and Welfare reported Monday that a total of 31,472 Chinese tourists received medical service last year, about one-fifth of the total number of 155,672 visitors here on medical tourism.

The number of Chinese patients last year grew by 63.7 percent from 2011, largely thanks to a surge in those interested in cosmetic surgery.

According to the ministry, more than half of the 15,428 visitors receiving cosmetic surgery last year came from China.

JK Plastic Surgery Center in Gangnam District, southern Seoul, is one of their favorite plastic clinics. Some 80 percent of the center’s revenue generated by foreign patients last year came from the Chinese.

“Setting up a center in China to receive complaints from people who have received medical treatments here could be one way of enhancing the credibility of our medical industry,” said Joo Kwon, head of the cosmetic center.

Boosted by a steep increase in the number of Chinese medical tourists, the total number rose by 27.3 percent compared to 2011, when 122,297 visited the country for medical tourism.

The United States followed China with 30,196 visitors. Japan and Russia followed next.

Thanks to the increased number of foreign patients, medical treatment fees derived from providing service to international patients reached 239.1 billion won ($209.9 million) last year, a 32.1 percent increase from 2011 when 181 billion won was recorded, the ministry reported.

The Health Ministry also reported the Middle East and Central Asian nations also began to take interest in Korea’s expertise in the medical industry, thanks to the government.

More than 1,000 patients from Saudi Arabia visited the country last year for medical service, a steep rise from 218 recorded in 2009.

“The joint medical industry globalization project by the government and private sector has appealed to many Asian regions. Especially, the domestic medical industry has begun to have a reputation for its high-quality and competitive medical fees, especially for patients from the Middle East,” said Moon Seo-in, researcher at the Korea Health Industry Development Industry Institute.