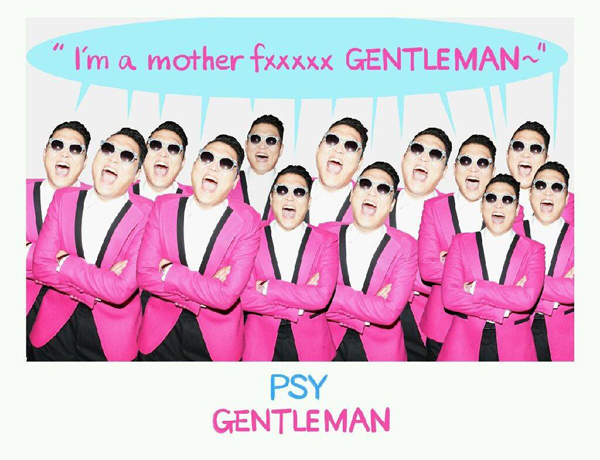 All eyes are on Psy to see whether his new single “Gentleman” can match the quirky “Gangnam Style” music video that became a worldwide sensation. [Twitter]

Psy is ready to conquer the world again with his latest single “Gentleman.” The song was released at midnight on Friday via iTunes New Zealand and moved to a total of 119 nations as the hours ticked by.

Although it was first scheduled to be released in Korea, fans’ demands forced the rapper’s agency to decide on a universal release date.

Foreign journalists have already begun reporting on the tune; the Independent even suggested that the song distracted South Koreans from political tensions with the North.

And at home, it has already topped music download charts.

Since then, Psy has made his way around the world, signed with Justin Bieber’s manager Scooter Braun and Universal Republic Records.

All the while, the music video has been amassing more clicks on YouTube; it recently moved past the unprecedented 1.5 billion mark.

And because the first time was clearly the charm, Psy decided to stick to the old formula.

“Gentleman” was written by composer Yoo Gun-hyung, the man behind “Gangnam Style,” and contains similar beats. Leading up to its release, there was talk that the song would be called “Assarabia” - slang for “Oh Yeah!” in Korean - but the idea was dropped as it might have been offensive to Arab listeners.

“As in the first track, where you had a guy who clearly wasn’t ‘Gangnam Style’ claiming to be one, the song has Psy proclaiming to be a gentleman,” a spokesperson from YG Entertainment said.

Although at first the agency thought it’d be a good idea to venture into a different genre, it decided that the international star should stick to what he does best, tongue-in-cheek dance songs.

Instead of “Oppan Gangnam Style,” the refrain in the second song might be easier for foreigners, as it goes, “I’m a mother, father, gentleman.”

The music clip to the cheeky song was filmed over four days from April 7 by Cho Soo-hyun, who also worked on “Gangnam Style.”

It is said to feature the cast of “Infinite Challenge” as well as Brown Eyed Girl’s Gain, who takes over for 4Minute’s Hyun-a, who appeared in Psy’s first hit.

The choreographer who came up with the horse-riding dance also created the moves for “Gentleman.”

Leading up to the launch of the video, Psy has been dropping hints to satiate fans’ curiosity.

On Thursday, he tweeted a picture of himself and YG Entertainment head Yang Hyun-suk looking at what appears to be Psy’s latest video on Yang’s laptop.

He also posted an animated picture of a mannequin wriggling its behind left and right decked out in men’s briefs that read “Psy. Gentleman.”

Earlier in the month, he announced that the new song’s dance moves were “something that every Korean knows, but foreigners don’t.”

With the song finally released, Psy will carry on with his busy schedule both at home and abroad.

Today he will hold the “Happening” concert at the Seoul World Cup Stadium in Sangam-dong, western Seoul. More than 50,000 fans will take in the show in person, while others can stream it live on YouTube.

The show will be Psy’s first solo concert since the guerilla gig in October that he staged for 100,000 fans free of charge.

Press from around the world will cover today’s show where the 35-year-old will shake his booty as only a true “Gentleman” from “Gangnam” can.