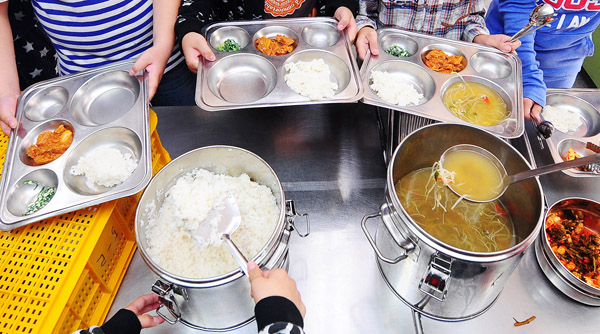 Children receive food at a school in central Seoul. Experts say teenagers should avoid the one-meal-per-day diet because they have higher calorie needs compared to adults.[NEWSIS]

The one-meal-per-day diet is really catching on among Koreans who want to lose a few pounds, but experts warn that a few groups are especially vulnerable to the meal regimen’s side effects.

Growing adolescents need significantly more calories than adults. For example, it is recommended that a male high school student consume about 2,700 calories each day, about 700 more than the standard guideline.

“Teenagers’ metabolism is fast and they need more energy to grow,” said Kang Jae-heon, a professor of family medicine at Inje University Seoul Paik Hospital. “If teenagers go on the one-meal-per-day diet, they should give up on growing taller. A girl might develop menstrual irregularities.”

The ideal diet for teenagers, he said, includes three meals a day with limited snacking.

“Snacks, bread, ice cream, pizza and deep-fried chicken are high in calories but low in protein and dietary fiber,” Kang explained. “By consuming junk food, students might lose their appetite and skip meals. It also makes them more likely to eat junk food in the future.”

Kang said teenagers could lose one to two kilograms (2.2 to 4.4 pounds) per month if they give up such unhealthy foods.

Bone density decreases by 3 to 5 percent every year in women older than 40, so younger women need to accumulate as much calcium as possible. The one-meal-per-day diet makes it difficult to consume the requisite amount.

Men in their 20s and 30s should also avoid the one meal diet as many drink alcohol at night, and doing so without food could be dangerous and potentially lead to bingeing.

“Many people who stick to the one-meal diet usually eat dinner, but research shows that calories gained from dinner are not burned as well as calories from breakfast or lunch are consumed,” said Park Min-seon, a professor of family medicine at Seoul National University Hospital.

The basal metabolic rate slows after the age of 50, so seniors should consume 500 to 700 fewer calories than they did before. But that doesn’t mean the one-meal diet is an acceptable solution.

“There are some people over 60 or 70 who eat just one meal per day because they have smaller appetites than before, but that’s the wrong idea,” said Park Yong-wu, a doctor of family medicine at Reset Clinic. “Seniors need fewer carbohydrates and fats because they get around less than young people, but protein is still an important source of energy for them.

“Protein is closely linked with longevity and stamina,” Park added. “People need 0.8 grams of protein per kilogram of body weight before 50, but that goes up to 1.2 grams after 50. Beans, tofu, lean meats and white fish are ideal foods for seniors as they are rich in protein.”